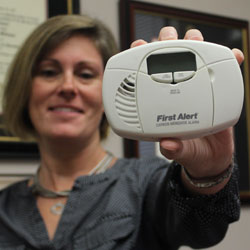 Amber Williams has a script, and she sticks to it. But she cries every time she reads it.

That’s because the University of South Carolina College of Nursing professor’s presentations on the danger of carbon monoxide poisoning involve a painful, personal experience — she lost Jeffrey Williams, her 11-year-old nephew, and nearly lost her sister-in-law in a deadly carbon monoxide incident at a Boone, N.C., motel in 2013.

“Immediately after that happened, I needed to learn as much as I could about carbon monoxide poisoning. I wanted to help (my sister-in-law) Jeannie make sense of what happened, and that led to our starting a foundation in Jeffrey’s memory,” Williams says.

Williams, director of the College of Nursing’s RN to BSN and RN to MSN programs, has become an advocate and educator on carbon monoxide (CO) danger — and a catalyst for efforts to install CO detectors wherever possible. When she became familiar with legislation requiring CO detectors in college residence halls, Williams followed up with the university’s fire marshal to make sure that installation was in process.

Carbon monoxide is generated by the combustion of fossil fuels, including gas, oil, kerosene, charcoal and wood. Two-thirds of Americans use such fuels as either primary or supplemental sources of heat in cold months. Inadequate or faulty ventilation of exhaust fumes can trap the colorless, odorless gas, replacing the oxygen in room air.

Every year, more than 20,000 people are sickened by CO poisoning and more than 400 die in the U.S. In South Carolina, 317 people were hospitalized and nearly 2,000 emergency room visits were attributed to CO poisoning in 2013, according to the state Revenue and Fiscal Affairs Office.

“My nephew was killed and my sister-in-law sickened because the hotel room they were staying in was located directly above a faulty natural gas-fired heater for the hotel’s indoor swimming pool,” Williams said, “The only reason my sister-in-law didn’t die was because she passed out in the bathroom where the ventilation fan was on.”

Williams is responsible for the formation of the Greater Columbia Carbon Monoxide Safety Consortium, a collaborative effort to increase community awareness and distribute CO detectors. The consortium consists of fire chiefs from the university, Irmo, West Columbia, Batesburg-Leesville, Lexington and Columbia, as well as representatives from the College of Nursing, USC Police, the American Red Cross, Firehouse Subs Public Safety Foundation and others who have partnered with Williams on these public safety initiatives.

A nearly $30,000 grant from Firehouse Subs Public Safety Foundation will enable volunteers from the Jeffrey Lee Williams Foundation, the Office of the State Fire Marshal and the CO safety consortium to conduct CO alarm blitzes. Grant funds will purchase 1,000 CO alarms and 20 personal CO monitors that volunteers can wear to detect unsafe CO levels as they enter homes to install CO and smoke alarms. The personal monitors will later be given to fire departments. Grant funding will also cover the cost of developing and distributing educational materials. The first distribution blitz will take place April 25 in Olympia, a community with a high concentration of student rentals.

“Most people know that carbon monoxide is bad, but they don’t know much more than that. It can’t be seen or smelled or heard or tasted, but it can be stopped — and you need a detector to do that,” said Williams. Through her dissemination efforts, she is making substantial strides toward her goal of increasing CO awareness and eliminating CO-related deaths.