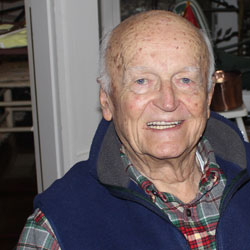 Class of 1942 graduate Jim Pearce chose to endow a professorship in the College of Hospitality, Retail and Sport Management to remember his son Mac, a 1972 UofSC grad.

Jim Pearce has given a lot to his alma mater over the years. But the 1942 Carolina graduate remembers with particular satisfaction a gift he made to Clemson University more than 30 years ago in honor of his brother, Roy, a 1941 graduate of the Upstate institution.

“I don’t know of anything that’s given me more pleasure than that. When he saw the happiness it gave me to honor him in that way, Roy decided to match my gift to USC during the Bicentennial Campaign,” said Pearce, referring to the $1 million Carolina Scholar endowment he and his late wife, Kit, created several years ago — an endowment that doubled in size with Roy Pearce’s match.

Jim and Kit also created a $1 million student scholarship endowment at the School of Medicine Greenville.

Jim, Roy — both World War II combat veterans — and their brothers, Tom and Phil, both Carolina graduates, turned a third-generation family grocery business into a regional restaurant food supplier that was eventually bought by Sara Lee Corp. They also later sold what had been the largest Anheuser-Busch beer distributorship in the Southeast.

“Mac was a good all-around fellow and very successful in business,” Jim said, noting that his son was the last president at Pearce Young Angel before the company was sold to Sara Lee.

With his business expertise, Mac Pearce had developed ties with the College of Hospitality, Retail and Sport Management. That partnership led the senior Pearce to create a $1 million endowment for the William McFall “Mac” Pearce Professorship in the School of Hotel, Restaurant and Tourism Management within the college.

“If you had to write down the specifications of what you’d expect of a son, he would come as close to meeting them as anyone could,” Pearce said. “I like the fact that this professorship will continue to honor Mac for generations to come.”

Learn how you can honor and memorialize loved ones in a variety of ways through Carolina's Promise.