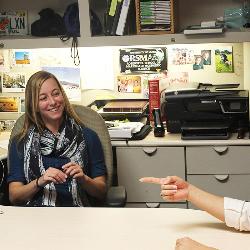 Kelly Gibson is the outgoing secretary-treasurer of the University of South Carolina Postdoctoral Association, which offers professional development seminars among other support services for researchers.

In common parlance, the phrase “global climate change” is often used to describe how present-day climate is changing in response to human activities. But climate has also varied naturally and sometimes quite rapidly in the past, with implications for the ocean and its ecosystems.

This is what University of South Carolina paleoceanographer Kelly Gibson and colleagues illustrate in a recent paper, which demonstrates the influence of rapid climate change on marine ecosystems off the coast of Venezuela tens of thousands of years ago and shows how changes there were accompanied by simultaneous changes globally.

One natural expression of global climate change familiar to most people is the coming and going of what are commonly called “Ice Ages” over the past several hundred thousand years, some of which coincided with the development of modern humans. The most recent glacial period, for example, occurred from roughly 90,000 years ago until 15,000 years ago, and Homo sapiens who had mastered the widespread use of fire were around for the entire duration.

The beginning and end of a glacial period are clearly times of global climate change, but there are also periods of abrupt change in climate patterns within those periods. Gibson’s recent paper, published in the journal Paleoceanography, contributes to a better understanding of just how the oceans reflect those rapid changes.

Using core samples from the ocean’s floor in the Cariaco Basin, a body of water in the Caribbean Sea off the coast of Venezuela, she measured the change in the ratio of two isotopes of nitrogen from about 35,000 to 55,000 years ago, right in the middle of the last glacial period.

Nitrogen isotope ratios can be used to estimate the change in the amount of bioavailable nitrogen over time. The various compounds containing nitrogen (such as nitrate, nitrite or ammonia) are essential nutrients for ocean life, particularly for phytoplankton that serve as the foundation of the food web. Measuring the ratio, Gibson says, can help scientists understand changes in primary productivity; that is, how much food there is for more complex forms of sea life, like crustaceans or fish, to “graze” on. And understanding primary productivity is important for understanding the changes in another compound of particular interest right now and for the foreseeable future: carbon dioxide.

“The primary producers, the phytoplankton, take carbon dioxide out of the surface waters and ‘fix’ it into a form of carbon that can sink down to the deep where it is stored,” Gibson says. “That’s one reason we care — the ocean is the biggest sink of carbon dioxide, and by looking at nitrogen isotopes we can indirectly look at what draws down carbon dioxide.”

Gibson and the team, which included her postdoctoral adviser Bob Thunell, a professor in the Department of Earth and Ocean Sciences in Carolina’s College of Arts and Sciences, then correlated the changes in the Cariaco Basin with changes in other markers of climate change at other sites all over the globe.

“That’s one thing this kind of research is really helpful for — showing the teleconnections in the climate system,” Gibson says. “So you see something in this one 4,000-square-kilometer basin off the northeast coast of Venezuela, but you see similar changes in the Arabian Sea and in the tropical Pacific, and you can link it all back to changes seen in an ice sheet in Greenland.

“So if ice is melting in the Arctic — you might think well, poor polar bears, but it doesn’t matter, right? It matters because you’re going to feel that effect everywhere. The global climate system is very interconnected.”

And the changes can take place very quickly on a geological, and even human, time scale.

“The climate transitions that we studied took place on millenial time scales, less than a thousand years, with some occurring over just decades to centuries,” Gibson says. “So over the course of a human lifetime, these would have been changes that an individual would experience.

“As remarkable as it is that climate can change that quickly naturally, what is even more remarkable is that some of the rates of change we’re experiencing today — increases in atmospheric carbon dioxide for example — are faster than anything we’ve been able to find in the past several million years of geologic history. The climate system has the ability to respond to these rapid changes, but only to a point. The more we know about natural rapid climate change, the better we can help climate modelers forecast how climate might change in the future now that human activity is added to the mix.”

The University of South Carolina Postdoctoral Association was formed a little more than a year ago and has organized several professional development seminars that were recorded and can be found on its YouTube channel.