The professor is always in 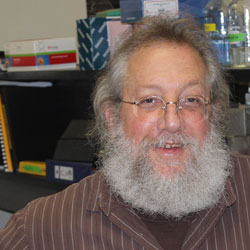 Professor of the Year

There are professors students find approachable, and then there is David Reisman, a biology professor who seems to embody the word.

Like other students, junior biology major Sarina Dodhia spent hours in Reisman’s office during the past two years, getting answers to her questions about cellular and molecular biology. She found her professor equally helpful in suggesting mentors for her upcoming honors thesis and even in critiquing — with an assist from his wife — rehearsal sessions of Moksha, the co-ed Bollywood fusion dance team that Reisman advises.

“He also helped me get in contact with the professor I currently do research for,” Dodhia says. “I know several students who share similar stories regarding Dr. Reisman.”

Little wonder that Dodhia and many other students nominated Reisman for the award he just received: the Michael J. Mungo Distinguished Professor of the Year Award, the highest honor the University of South Carolina bestows on faculty.

“My door is always open. I tell my students to come by any time,” says Reisman, who joined the biological sciences faculty in 1991 after post-doctoral fellowships at the Weizmann Scientific Institute in Israel and at the University of Colorado-Boulder.

“I treat students almost as peers, certainly as equals, and I think they feel comfortable around me.”

That attitude has paid unexpected dividends, Reisman says. Undergraduate students who work in Reisman’s lab are never afraid to confide in him if something breaks or if an experiment is compromised by mistakes they made. “No matter how bad a mistake they make, they tell me,” he says. “I’ve been in places where people are afraid to tell a professor if something goes wrong, but this allows for open communication and gives me confidence to trust the results of our research because my students come to me no matter what.”

Reisman directs the tissue bank of the university’s Center for Colon Cancer Research and has a solid record of external funding for his own cancer research, which focuses on p53, a pivotal tumor suppressor gene. He’s found that incorporating undergraduate students into his lab group and assigning them their own piece of the overall projects not only creates worthwhile experiences for the students but also provides key opportunities to teach.

“That’s one-on-one time in the lab when I can show them not only how to do something but explain why it’s important in the big picture of things. It’s an opportunity for them to feel ownership in the system,” Reisman says. “When you’re a student working in a lab every day, that space becomes yours. It changes your perception of the college experience because you have a place to call home on campus and you’re doing something that’s making a difference.”

Nicole Doudican, a 1998 Carolina graduate, is a research scientist at New York University Langone Medical Center. She credits time in Reisman’s lab to her graduate school and career success.

“Dr. Reisman takes a hands-on approach to mentoring,” says Doudican, an Honors College alumna who settled on majoring in biology after taking his cellular and molecular biology course. “He would work side-by-side with me at the bench and would always walk me through protocols to ensure that I knew the science behind each step. When I started graduate school at Emory in 1999, my advisers were impressed with my experiences with a breadth of laboratory techniques — all of which I learned from Dr. Reisman.”

But it’s not all scientific technique and no play. Reisman confesses to telling a few funny stories in class to keep things lively, and along with advising the Indian dance team, he’s become the faculty adviser for Cocktails, a women’s a capella group.

For Reisman, it all comes back to a common denominator. “Whatever students want to talk about,” he says, “career stuff, personal stuff, what courses to take — I’m willing to listen and discuss.”