Where no one has gone before 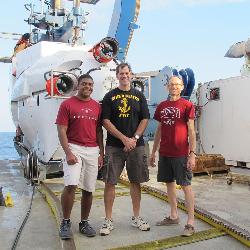 More than a mile-and-a-half below the surface of the ocean, associate professor Scott White and undergraduate researcher Avery Lee (see a story about his experience) explored a seafloor never before seen by humans, looking for signs of deep-sea volcanism.

These days, a few mouse-clicks can open a virtual window onto any location worldwide, thanks to centuries of work by cartographers and all of the software tools now harnessing it.

But on just about any given map, online or otherwise, continents are typically surrounded by a uniformly blue ocean. That undoubtedly contributes to a lack of awareness that Scott White, an associate professor in the Department of Earth & Ocean Sciences, knows is all too common.

“Seventy percent of the Earth’s surface is underwater, and most people still think it’s all a flat plain covered with sand,” White says. “That’s always astounded me.”

Discovery is never far from White’s mind, and underwater volcanism was his quarry last fall. He and undergraduate Avery Lee sailed on the R/V Atlantis to a remote part of the Pacific Ocean 1,000 miles from the Central American coast. The ship arrived at the intended longitude and latitude, but it took the Alvin deep-sea submersible to get to the true destination: more than a mile below sea level near the ridge of the East Pacific Rise.

A mountain range that runs longer than any of the continental ranges, the East Pacific Rise is not nearly as well known as, say, the Rockies or Andes because the entire thing is obscured by the ocean.

The underwater range is the result of the slow separation of tectonic plates. As the Pacific plate moves west at an average rate of a few inches per year, adjacent plates to the east move east. Fissures periodically open, releasing lava. Each lava flow adds a bit to the ocean crust and creates a new surface rich in volcanic features.

Those features include a variety of hot springs called hydrothermal venting, including the hydrothermal chimneys that caught Lee’s imagination as a student (here’s a story about his experience).

The East Pacific Rise is a hotbed for superheated upwellings, which can emerge from the seafloor at temperatures of up to 400 degrees Centigrade, meeting bottom waters that average just a couple of degrees above zero.

The collision of hot water loaded with dissolved minerals from under the earth’s crust with ice-cold bottom waters creates deposits that, under the right conditions, build chimneys that can extend 10 to 20 meters above the seafloor.

There are plenty of chimneys and other vents clustered around the ridge itself, and some recent seismic mapping revealed magma chambers just below the seafloor even further from the ridge — about three miles from it.

That observation led White to consider the possibility that venting might occur far from the ridge of the East Pacific Rise. The monthlong Atlantis cruise included a couple of shots across the bow to explore that hypothesis. Two forays of the Alvin deep-sea submersible were conducted about three miles off-axis; that is, away from the ridge crest that has long been the focus of scientific attention.

The two dives went to places that no human being has ever seen before, and although the team didn’t find chimneys or other obvious signs of hydrothermal vents, they did see enough to want to keep looking.

Besides finding ropy and sheet-flow lava, two kinds of underwater expressions of past volcanic activity, they found that sediment covering the seafloor was of differing depths. They think the thinner sediment might indicate that parts of the terrain were the result of more recent volcanic activity than thought possible.

Their instruments also registered changes in water conductivity that could indicate seepage of subterranean minerals. Subterranean seepage would indicate magma residing at shallow depths close to the seafloor.

If that were the case, it would be a matter of covering enough ground to find its full expression. The Alvin deep-sea submersible viewed just the tiniest sliver of an area off-axis of just a single point on the East Pacific Rise, which extends from near the California-Mexico border to Antarctica.

Being able to visit and document a planetary landscape hardly ever visited by humans is one of the reasons White got into this line of work.

“I really like the idea of being an explorer, seeing and discovering stuff that nobody has ever seen, finishing off the mapping of the planet,” White says. “It’s pretty fascinating.”

This feature story and the accompanying sidebar about Avery Lee’s experience (online here) appear in the April issue of the USC Times.