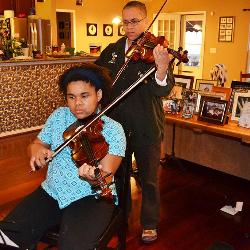 The UofSC String Project marks its 40th anniversary at the Koger Center for the Arts at 7 p.m., Monday (May 4).

When Amelia Hare, an 11-year-old String Project violinist, practices at home she has help in the next room. Her mother, Michelle Martin, an accomplished amateur musician, is just a few feet away. A native of Columbia, Martin knows the reputation of the University of South Carolina School of Music initiative first hand; she was a String Project student herself more than 35 years ago.

“When our family moved back to Columbia, getting Amelia involved in String Project was tops on our list,” says Martin, a UofSC professor of children’s and young adult literature in the School of Library and Information Science.

This academic year marks the 40th anniversary of the community initiative, and since its launch, the program has remained focused on its founding mission of increasing teaching opportunities for undergraduate music education majors and expanding access to music performance education to children of all socioeconomic backgrounds, explains String Project director Gail Barnes.

Along the way, the program has grown in prominence and serves as a national model, replicated at other universities and colleges throughout the country. “We started with 10 schools, initially,” says Robert Jesselson, the project’s former director. Today, 42 universities and colleges have String Projects on their campus, “all modeled after the one here. Programs are at all types of institutions—large public and private universities, small colleges and schools located urban and rural communities.”

What’s more, the National String Project Consortium, an organization founded by Jesselson in 1998, supports the growth and development of string project programs across the country. Since its inception the NSPC is responsible for the instruction of more than 8,000 children of public school age around the U.S.

Locally, String Project’s reach is clear to see, says Jesselson. “In the early '80s, only a few public schools offered string instruction. Now every school in the Midlands  – elementary, middle and high school – has a string program.”

But beyond its intrinsic value, music education facilitates student academic achievement, Barnes says. “The data clearly shows that the study of an instrument improves math, language, reasoning and critical thinking skills. And students who continue music studies through high school earn higher scores on both verbal and math sections of the SAT.”

Martin agrees. “The benefits go beyond the enjoyment of music. The violin is an excellent way to improve concentration,” she says. “Amelia may never achieve brilliant talent, but that’s not really the point. The point is to learn how to stick with something and get better, to learn discipline.”

Amelia, a sixth grader, is sticking with it. This is her fourth year in the program. “I like the violin because there are so many different pieces you can play. Right now, I want to learn to play the ‘Downton Abbey’ theme. The violin part is awesome.” And with the encouragement of her mother close by, she’ll soon be able to play it.

Editor's note: The author is the young violinist's nonmusical father.

A concert commemorating the 40th anniversary of the USC String Project takes place at 7 p.m. Monday (May 4) at the Koger Center for the Arts. Admission is $5.