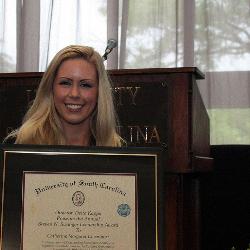 Catherine Davenport is the recipient of the 2015 Steven N. Swanger Leadership Award.

Catherine Davenport credits her Gamecock family with helping her survive the loss of her father during her sophomore year at the University of South Carolina.

“When my dad died, I lost my best friend,” she says. “Twenty years of knock-knock jokes, butterfly kisses and goodnight prayers were taken captive when cancer invaded his brain. I was furious, confused and heartbroken.”

But the Columbia native found support and a second family among her sisters of Chi Omega and fellow Capstone Scholars and members of Omicron Delta Kappa, the organization that presented Davenport the 2015 Steven N. Swanger Award for exemplary leadership.

In addition to earning a 3.9 GPA as an English major, Davenport served as the president of her sorority and was a finalist for the 2014 Outstanding Woman of the Year as well as being named Homecoming Princess in 2013. She also has starred in several theater and dance performances during her time at Carolina.

After graduating, she plans to start the master’s program in public history at UofSC.

“I majored in English because I love storytelling,” Davenport says. “What I realized along the way, though, is that I could marry my love of English with my love of history into a career in museums.”

Davenport says she was profoundly affected by the women she met while volunteering in Chiang Mai, Thailand, with an organization that intervenes in cases of human trafficking.

“What I really want to do is tell the stories of people who don't have a voice – like the red light district women I met in Thailand – in a way that the world can understand,” Davenport says. “There are so many people in our world's history whose stories someone decided a long time ago weren't worth hearing. I want to change that, and museums are the best place to tell a story in an impactful way.”

The Steven N. Swanger Leadership Award, the university’s second-highest undergraduate honor, is named for a former president of Omicron Delta Kappa, which sponsors the university’s Awards Day. It is given to a graduating senior for exemplary leadership and for making significant contributions to the Carolina community.

“Touched by my USC family, I’ve made it my goal to lead sincerely,” Davenport says. “If I’m able to leave behind a shred of the heart Carolina has given me, I’ve succeeded.”