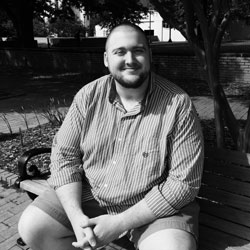 After graduating from the University of South Carolina this spring with a degree in history, Alexander Keene plans to study Hindi at the American Institute for Indian Studies in Jaipur.

Four years in college can change a person’s a life, but so can a really good curry.

OK, there was more to University of South Carolina history major Alex Keene’s study abroad experience at Britain’s University of Warwick than chicken korma and lamb vindaloo — a great deal more — but sharing meals with new friends from other cultures did play a significant role in changing the graduating senior’s life trajectory.

During two semesters abroad in 2012-13, Keene fell in with an eclectic group of international students, including British nationals with South Asian heritage as well as Indian and Pakistani internationals. Some of his fondest memories are of long conversations at England’s legendary curry houses, where discussions ranged from Indian history and politics to Bollywood.

“I learned more and more about South Indian culture, and I got really into Indian food, which I’d never had before,” he says with a laugh.

“Before I went to Warwick I wanted to see more of the world and meet more people from different places, and I was excited because Warwick is a really good school, but the experience was so much deeper than I ever expected.”

The British classroom experience was also an eye-opener. Thrown into an educational system predicated on the Socratic method, he was expected to do more than just read the assignment and show up for class.

“Usually, you have a big lecture with about 40 people and then a seminar with about 10, and everybody speaks up,” he says. “Those sessions really keep you honest, and you need that if you’re going to keep up. And, of course, that really helped me when I got back to USC.”

Indeed, Keene says he really hit his stride when he returned to campus in the fall of 2013.

“I didn’t really have a specific focus until after I came back from Warwick,” he says. “That’s when I really started to focus on India.”

In addition to immersing himself in Indian history and literature, Keene took a Bollywood film course and began teaching himself Hindi. Then, his senior year, he completed an undergraduate research project on South Asian populations in colonial and postcolonial Africa through Carolina’s Magellan program, working with history professor Josh Grace.

“Dr. Grace does East African history and development, and I’m interested in South Asia, so we found a project that would combine our interests without compromising them,” Keene says. “We ended up looking at how the relationship between Indian and African people in Uganda, Tanzania and Kenya created an identity through which they could resist colonialism.”

And Keene doesn’t plan to stop learning about Indian culture just because he’s graduating. This summer, he will enroll in a Hindi language course at the University of Wisconsin in preparation for his next overseas adventure — at the American Institute for Indian Studies in Jaipur, India, where he hopes to become fluent in Hindi.

As to what he will do after he completes that course of study, Keene remains unsure — he may go into development work, he may pursue a Ph.D. and re-enter academia as a professor — but he knows what he wants in the meantime.

“Being able to speak an Indian language is really the most important thing in my life right now,” he says. “I want to be 100 percent invested in a conversation, to be able to talk to normal people in their language.”

Oh, and he's also looking forward to the next really good curry.