'The stuff dreams are made of' 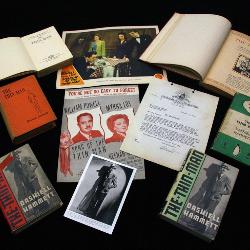 Dashiell Hammett is considered a master of crime fiction. His family and biographer have chosen USC Libraries for his personal and professional papers.

Dashiell Hammett was famed for creating the epitome of the hardboiled detective, Sam Spade, and turning the detective novel into literature.

“He wasn’t just a crime writer,” his granddaughter Julie M. Rivett says. “The best of his work is not so much about crime as it is about human nature, and it defies genre.”

That is one reason why the family chose the University of South Carolina as the new home for the Hammett Family Archive, which joins the Layman Hammett Collection at USC Libraries.

“This is the most comprehensive Dashiell Hammett collection in the world,” said Tom McNally, dean of USC Libraries.

The family archive includes love letters, political writings, family photographs and correspondence from editors. The Layman Hammett Collection is the archive of Richard Layman, Hammett’s biographer and a trustee for the Hammett Literary Property Trust. Layman spent 40 years researching the life and work of the man best known as the author of “The Maltese Falcon.”

Rivett says the university offered two important distinctions for her family: first, the collection would be open and available to scholars; and second, it would be among the collections of not just some of the best crime-fiction authors in the world, but among some of the best literary writers, including Ernest Hemingway and F. Scott Fitzgerald.

“My grandfather wanted to be a mainstream writer. He really wanted to be the next Fitzgerald. And he was friends with Fitzgerald and he was friends with Faulkner and those guys,” Rivett says. “So while he is in the company of other crime writers, he is not being pigeonholed as just a crime writer and that means a lot to me and means a lot to him, I think.”

Hammett’s best-known novel, “The Maltese Falcon” went into seven printings in 1930, the year it was published. A story of lies, greed and betrayal, John Huston’s 1941 movie version featured Humphrey Bogart as Sam Spade, the private eye who came to symbolize a different breed of detective hero. In 1934, “The Maltese Falcon” became the first detective novel to be published in the prestigious Modern Library.

In the 1930s, Hammett was a national literary celebrity, enjoying success as a novelist and screenwriter. He lived a life as colorful as some of the characters he created. He drew on his time as a Pinkerton detective to inform his crime stories, creating authentic dialogue and scenes. He served in the military in World Wars I and II, yet was a member of the Communist Party USA and spent six months in federal prison for contempt of court charges. A dapper dresser, Hammett was rail thin, with a shock of white hair and a dark mustache. He lived recklessly, spending most of his money on women and liquor, yet he never divorced his wife and had a 30-year relationship with playwright Lillian Hellman, whom he met in Hollywood in 1930.

“Hammett is probably the single most important writer of crime fiction this country has produced,” said Greg Forter, English professor at the University of South Carolina. “Hammett invented almost singlehandedly a new kind of character, a new code of masculine response to the temptations and dangers of the modern world, and a new kind of style based in reduction, omission and emotional restraint.”

Layman, who became interested in Hammett while he was earning his doctorate at the University of South Carolina, went on to write Hammett’s definitive bibliography and the first full-length biography of the writer, “Shadow Man.” Layman has written and edited nine books about Hammett, four of them with Rivett. Layman is president of Bruccoli Clark Layman and managing director of Layman Poupard Publishing in Columbia. The firms produce reference books and literary history for Gale Cengage, including the Dictionary of Literary Biography and the Literature Criticism Series.

“I first became aware of Dashiell Hammett's work in a graduate-level class on American literature. He was introduced to me as a major writer, taught along with Faulkner, Hemingway, Steinbeck and Fitzgerald,” Layman said. “That first impression, I think, made all the difference. I didn't have to overcome the prejudices that stigmatize crime fiction to arrive at the realization that Hammett is a major writer, not a major detective-fiction writer. “

Both Layman and the Hammett family believed their two collections needed to be kept together.

“The individual pieces — letters, documents, photos, personal items — are fascinating and informative. The aggregate is even better — rendering a wide-ranging portrayal of the life and times of an important American writer, activist and celebrity. It’s important material and that needs to be shared responsibly,” Rivett says.

Hammett’s work is now part of UofSC Libraries’ extensive crime fiction collection, taking its place among the archives of Elmore Leonard, James Ellroy and George Higgins that already are part of the library’s holdings.

“The acquisition places the University of South Carolina at the very forefront of places for archival study of American crime fiction — adding papers and photos relating to the most influential hardboiled crime writer to our considerable holdings of James Ellroy and George V. Higgins materials,” Forter says. “The addition of these new materials — especially the stories he published in magazines like ‘Black Mask’ in the 1920s — makes it possible to trace in rich detail his development as a writer.”

Layman says he chose the University of South Carolina Libraries for a simple reason: “They care more here. You want to be assured that people will care for the collection, that they will use it, bring people here to use it and add to it.”

“A Life Collected: Announcing the Dashiell Hammett Collection in the Irvin Department of Rare Books and Special Collections, University of South Carolina Libraries,” will be up May 27-July 31 at the Hollings Library. The collection includes everything from love letters Hammett sent to his pregnant girlfriend, Jose Dolan, during their 1921 courtship to letters he wrote from prison while jailed on contempt of court charges. Also included are letters from Lillian Hellman to Hammett’s daughters as well as many first editions of his novels and copies of magazines that serialized his stories.