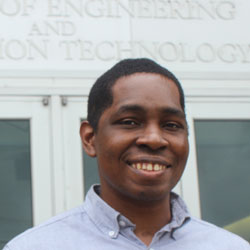 The long journey to graduation

Recovering from a near-fatal car accident added years to James Wilton Holiday's quest for an engineering degree. But his determination to graduate never faltered.

James Wilton Holiday never doubted he would earn a degree in mechanical engineering from the University of South Carolina. Not when he struggled in his first year of studies. Not when a car accident nearly ended his life, and not when he missed three consecutive semesters.

“I wanted to become an engineer,” he says. “Being in a car accident and losing those three semesters was a setback, but if you put your mind to it, you can achieve great things.”

Sometimes that means coming up with Plan B, which is what Holiday did after that first difficult year of study. He transferred to USC Aiken, near his parents’ home, and focused on getting back on track. Midway through the second semester there, Holiday’s car was broadsided by a driver who didn’t heed a stop sign at a busy intersection. His sister and mother, also in the car, were mostly unscathed; his younger brother sustained minor leg injuries.

“Wilton was airlifted to the hospital, and the doctors looked at him and thought he was not going to live,” says his mother, Sybrenda Holiday. “As the doctors spoke to us, they gave us little hope and a slim chance of his survival.”

With his parents by his bedside praying, Holiday was in a coma for nine days. He woke up, but because his brain was still swelling, doctors temporarily removed both sides of his skull to alleviate the pressure. Holiday was eventually moved to a rehabilitation hospital, and, 103 days after the accident, walked out on his own.

“It was a roller coaster, though,” his mom recalls. “He had an infection and was dizzy all the time. But the physical therapists were just so patient. They kept working with him, and he didn’t give up.”

Holiday sat out the 2010-11 academic year and returned to USC Aiken in fall 2011, initially taking classes part time. By the time he was ready to transfer to the Columbia campus for fall 2012, Holiday had received the Most Outstanding Engineering Student Award from the Aiken campus.

“The transition back to Columbia was OK, but I had to work hard,” Holiday says. “I’ve been aiming for a 3.0 GPA.”

“I feel better now than I did before — I’m not experiencing any side effects now,” Holiday says. “When he was in the hospital room every day, my dad prayed for total restoration of my mind, body, soul and spirit. God answered our prayers.”