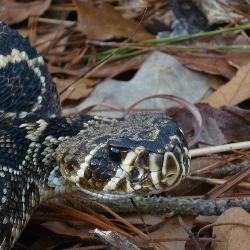 Don’t tread on me — seriously, now

The eastern diamondback rattlesnake might be in the twilight of its very existence. A famous emblem of revolutionary-era America featured on the “Don’t Tread on Me” flag, the eastern diamondback has had its habitat reduced to just three percent of what it was when Europeans first arrived.

Two words that arouse immediate fear in some people inspire something else altogether in Jennifer Fill.

“I love snakes and fire,” Fill says. “When I was looking at grad schools, I thought, ‘if I can just combine those two things, I bet I’ll be really happy.’”

It’s not about cozy campfires or garden-variety garters for Fill, a biologist who recently defended her dissertation at the University of South Carolina. The fires she’s interested in are forest fires, and the snake that was the subject of her doctoral studies is Crotalus adamanteus, commonly called the eastern diamondback rattlesnake.

Once widespread throughout the southeastern U.S., eastern diamondback rattlesnakes have become extremely rare due to loss of their habitat. An eastern diamondback hasn’t been spotted in the wild in Louisiana in twenty years, it’s become a state-protected rarity in North Carolina, and conservationists applied in 2011 to have it listed federally as an endangered species.

One key element of the diamondback’s natural habitat is Fill's second research love: fire. Diamondbacks have long been associated with open-canopy forests, or savannas, in the southeastern U.S. These habitats experience frequents fires, which turn out to be no problem for at least one important tree, the longleaf pine, Pinus palustris. Fill says its combination of growth patterns and structure make the longleaf pine one of the most fire-resistant trees around.

“For its first six to twelve years, it stays a little seedling at ground level,” she says. “It develops a deep taproot, and if a fire comes through, the needles burn in a way that protects the growing tip of the plant.”

After those early years of looking more like grass or a tiny bush at ground level, the longleaf pine has a burst of growth, a “bolting” stage that manifests a tall tree with a firm root. In the southeastern coastal plain, the tree creates a natural habitat of well-spaced pines with a dense groundcover of grass and low-lying shrubs — fuel for the frequent and necessary fires in the savannas.

A savanna ecosystem supports the kinds of medium-sized mammals that eastern diamondbacks subsist on, such as rabbits, fox squirrels and raccoons. Fill recently published a paper in PLoS One showing just how critical that open-canopy environment is to the diamondback. Using telemetry to follow the weekly-to-daily movements of a group of snakes in Colleton County, on the southeastern coastal plain of South Carolina, she and her colleagues demonstrated that pine savanna was an integral part of the animal’s natural habitat.

Conservation-minded scientists are interested in identifying surrogate habitats that might support the dwindling population of eastern diamondbacks. The recent paper addressed marshes as a potential candidate, but one particularly noteworthy observation in the research is that every eastern diamondback they studied had pine savanna as a part of its home range.

Open-canopy longleaf pine forests have been drastically reduced in acreage over the years for a number reasons, one of which can be ascribed to a common conservation practice promoted by another animal used as an emblem — Smokey the Bear.

Forest fire prevention has had a side effect of converting many savannas into dense forests by removing the selection pressure of natural, periodic wildfires or managed fires from the equation, Fill says. The longleaf pine is out-competed by other tree species, the open canopy is closed and the ecosystem changes accordingly.

Many property owners, however, actively manage their land with prescribed burns. Quail habitats, for example, are best maintained with periodic fires, and acreage managed in that way (Fill worked on such a property for her recent paper) supports the diamondback populations as well.

Fill, who is interested in applying academic research to practical conservation efforts, appreciates the disposition of the rattlesnakes — and snakes in general after working with them for years. She had to periodically capture diamondbacks to replace or fit a new radio transmitter for tracking, and handling them over the years reinforced the textbook conclusion that snakes are innately shy, even ones that might have a fearsome reputation.

“The very last thing that they want is for you to even see them, much less rattle or bite,” she says. “Once I was tracking a snake and I knew she was really close by, and it took me forever to even see her, and she was right next to me. She didn’t even rattle when I was picking her up with the hook and putting her in a bag.

“These snakes are not aggressive animals and actually have distinct personalities.  It’s been a privilege to see how they live in these fiery places.”

To help support research like Jennifer Fill's at the University of South Carolina, visit Carolina's Promise.