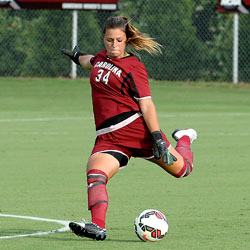 On May 8, when the exercise science major should have been walking across the stage at the University of South Carolina’s Colonial Life Arena, she had other goals on her mind — the kind she spent four years preventing as a standout goalkeeper for Carolina’s women’s soccer team.

After being drafted by the National Women’s Soccer League’s Western New York Flash back in January, D’Angelo reported to training camp in March — then had to finish her final course, a class on epidemiology, on the road. On graduation day, the two-time first-team All-American was in Rochester, N.Y., the starting goalkeeper in a game against FC Kansas City.

“I was OK with missing graduation,” she says with a laugh. “My mom wasn’t too OK with it, but my goal has always been to play professional soccer and that’s what I was doing on that day. It’s a sacrifice I was obviously willing to make, and I would make it again and again.”

And anyway, it wasn’t like she didn’t get to enjoy some well-deserved recognition at the end of her college career.

The most decorated student-athlete in Carolina women’s soccer history, D’Angelo was awarded the President’s Award by the University of South Carolina Athletics Department in April. The award recognized her achievements both on the field and off.

“Coming into South Carolina, Jamie and Shelley Smith (assistant and head coach, respectively) had told me about the award, and the goalkeeper who was there before me had won it, as well as past players,” says D’Angelo. “It was kind of always a goal of mine, and it’s a huge honor, but it’s a reflection of the team and how much support I got from them. Plenty of people played into it.”

In addition to coaches Jamie and Shelley Smith and her teammates, D’Angelo credits her strength and conditioning coaches for inspiring her to consider that career path after her playing days are over.

“After I finish playing, I either want to go into coaching or be a strength and conditioning coach, something where I’m able to interact with athletes and where I can help them reach their goals,” she says. “The coaches I had did such a tremendous job helping us achieve our goals, and I want to be able to give back to other athletes.”

In the meantime, though, the Ontario, Canada, native is focused on more immediate goals — winning a championship, making the Canadian national team, eventually competing in the Olympics or the World Cup.

“It’s not college anymore, it’s your job, you have to perform your best every single day,” she says. “But I enjoy pressure, and it’s been exciting being able to start as a rookie.”

And while Mom and Dad may have missed the pomp and circumstance back in Columbia, they have pretty good seats for watching her achieve the rest of her goals.