Fresh air in a crowded world 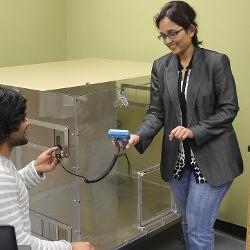 Whether it’s the flu, truck emissions or an anthrax attack, Shamia Hoque is on a mission to keep people safe when the air they breathe in this highly interconnected world is a hazard.

And airborne hazards are everywhere — meaning there are just as many opportunities to thwart their spread, provided someone asks the right questions. If a co-worker returns from a vacation carrying tuberculosis, for example, can the disease’s reach be diminished by good office design? Can a teacher open the windows in a classroom without making students sick from the exhaust fumes of school buses idling nearby? If an under-the-weather airline passenger is later found to have SARS, which passengers might merit quarantine and what precisely needs to be cleaned to ensure no one else propagates an epidemic?

Hoque, an assistant professor in the department of civil and environmental engineering, is an expert in understanding how airborne species — including gases such as carbon monoxide, soot particles, pathogens like the H1N1 virus or aerosols like weaponized anthrax — behave in complex, real-world environments. An assistant professor of civil engineering, Hoque develops computer simulations that predict where, how fast and in what concentrations these particles move. The computer models simultaneously take into account details such as furniture arrangements, ventilation register locations and the volume flowing through the air-handling system as well as how the particles’ toxicity might decrease over time.

The models can be helpful both reactively and proactively, she says. Her dissertation examined the 2001 anthrax attacks on Congress, during which positive anthrax tests came back even from areas that were thought to have been cleaned.

“One thing I want to do is take these detailed models that only a few people can understand and interpret, and transform them into something simple, like an app,” she says. First responders could then plug in rudimentary information to find the most high-risk areas to focus on, while a more detailed analysis could subsequently identify unexpected places, such as ductwork, that might merit particular scrutiny.

Hoque has even received interest in using her computer models forensically. From the residue locations of an airborne pathogen discovered after the fact, for example, Hoque might be able to reconstruct the time and place that it was first released.

And proactively, an analysis can show which workspace or urban environment designs best isolate airborne pathogens so that large-scale spread of winter colds (or worse) might be prevented in an office space. Or how adding a series of half-walls to an architect’s blueprint might reduce patient-to-patient infections in a hospital under construction.

As the built environment — the indoor and outdoor areas where people work, live and recreate — grows, the interdisciplinary movement to make its buildings, parks and interior designs integrated and energy-efficient has created close quarters for everyone. Shamia Hoque is part of the team ensuring that that togetherness can be as safe as possible.

To help support research like Shamia Hoque's in the College of Engineering and Computing, visit Carolina's Promise.