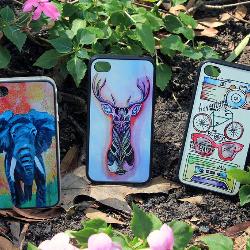 Vincent Felix and a group of artist friends have created a line of hand-drawn phone covers. Felix hopes to use his business to make a difference in people's lives.

Vincent Felix owns a business that makes and sells decorated covers for cell phones. But his plans for his business are so much more than sales and revenue.

But he says after nearly two years of hard work, Mr. Penguin Designs has sold more than 400 cases and can pay its bills, even if it isn’t quite turning a profit yet.

One key business move was teaming up with a local phone company based in Rock Hill, S.C., Comporium Communications. Felix met Comporium residential sales manager Tim Hallman – himself an alum of USC Lancaster and a ’97 graduate of the Columbia campus with a bachelor’s in interdisciplinary studies – at a business class at Lancaster.

“He has found success in one of the most competitive markets around,” Hallman says of Felix. “He is a true entrepreneur and very enthusiastic.”

“I told him what I needed, especially about packaging,” Hallman says. “He got everything we needed and at a good price point.”

Hallman says the covers’ dynamic designs are what catch everyone’s eye. It was Felix’s own case that Hallman saw during his guest lecture on business ethics that led him to say hello.

Those designs come from the artists Felix has known for years. He takes their original hand-drawn designs and applies them to plain covers using a heat method. He buys the blank covers wholesale.

“The designs actually become part of the plastic,” Felix says. “We chemically embed the image on the blank case.”

But making and selling cases is only part of his mission.

“Our first goal was to make and sell phone cases,” he says. “But now, we are looking at how we make an impactful business. I want to change the world. I want to demonstrate that business can be about more than generating revenue.”

He says part of his inspiration comes from his grandmother, a migrant farm worker in California whom he describes as a fighter and who was able to send two sons to college.

“My vision is very idealistic and I get that," he says. "But that’s how I’ve gotten to the point where I am now.”