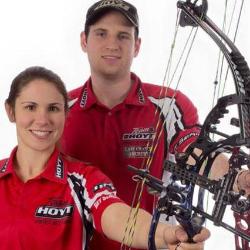 Carli Cochran and Garrett Abernethy are representing the University of South Carolina at the 2015 World University Games.

From 55 yards away, a five-inch yellow circle appears miniscule. But that little circle is plenty big enough for archery champions Garrett Abernethy and Carli Cochran, who can consistently drive one arrow after another into the bull's-eye.

The two Carolina undergrads are on their way to the World University Games in South Korea where they’ll compete in the compound bow division with collegians from around the globe. The two qualified for the games by qualifying at the World Game Trials in Los Angeles. At their most recent tournament, Garrett and Carli both won individual and mixed team gold at the U.S. National Outdoor Collegiate Championships for the University of South Carolina.

“I really like the fact that the skills you acquire from archery transfer over academically and professionally — the concentration, the focus, the routine of practice,” says Cochran, who met Abernethy at an archery tournament six years ago and transferred to Carolina in 2013.

Cochran, a business management major/criminal justice minor, got interested in archery after going deer hunting with her dad in Pennsylvania. A couple of months later, she went to her first archery tournament and since then has competed in more than 60 tournaments in the U.S. and abroad.

Abernethy, a mechanical engineering major who plans to graduate in December and begin the master’s program, has also traveled extensively for archery tournaments — a side benefit of competing, he says.

“You get to see different parts of the world; that’s what I like about it,” he says. “And it’s a sport where you can continuously improve. You’re not competing against other people so much as trying to improve upon yourself to get the best score you can.”

Being consistently ranked among the very top tier of collegiate archers in the country requires three things, Cochran says: form perfection, flawless release of the arrow and consistent aiming. Over and over and over. That’s why Abernethy and Cochran practice several times every week, shooting 100 arrows each time.

The World University Games this year will be the world’s second largest multisport event, behind only the Olympics with 575 athletes, coaches and trainers from the U.S. alone. It should be quite the stage for Abernethy and Cochran to once again represent Carolina.