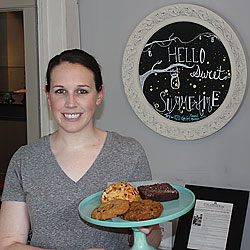 Fresh from the oven

Erin Nobles started Silver Spoon Bake Shop 18 months ago after earning a degree from the College of Hospitality, Retail and Sport Management and working several years for bakeries in Charleston and a catering firm in Charlotte, N.C.

There are two constants in Erin Noble’s life, but she’s not really wild about the first one — waking up every day before 5 a.m.

It’s the other one, though, that gets her up and keeps her going: the prospect of greeting by name an ever-growing list of customers at Silver Spoon Bake Shop in Columbia.

Nobles knew for years that she wanted to become a pastry baker. She’d grown up in the kitchen with a mom who loves cooking and often helped her grandfather bake cookies and cakes. By the time she finished high school in Bennettsville, S.C., she was ready to skip college and head straight to culinary school.

“But my parents talked me out of it,” she says. “They said, ‘What if you don’t like it? You won’t have anything to fall back on.’”

So Nobles enrolled in the University of South Carolina’s School of Hotel, Restaurant and Tourism Management, finished her degree in 2009, then headed to the International Culinary Center in New York City.

“I thought about starting my own place up there, but I like to cook Southern style and knew it wouldn’t go over there,” she says. So she worked for two years for different bakeries in Charleston, taking notes on all the things she liked and didn’t like. She then worked for a catering business in Charlotte, N.C., but the grind of late-night weekends soon had her thinking it was time to strike out on her own.

She soon found a house at 2507 Devine Street, just up from Five Points, and with her parents as investment and advisory partners, began upfitting the 100-year-old residence as a neighborhood bakery. She purchased used commercial ovens and drew from her previous stints in Charleston to create a comfortable vibe.

“We open at 7:30 a.m. so I start baking at 5 a.m. every day, and at 4 or 4:30 on Friday mornings when we serve five types of croissants,” she says. “I’ve become a morning person. It’s a demanding job because you’ve got to be mentally prepared to measure ingredients and start baking right away. You can’t just show up half asleep at 5.”

Nobles credits her three employees and the community’s embrace of their product with the Silver Spoon Bake Shop’s success in its first 18 months. A steady stream of regulars come every week — some nearly every day — and word of mouth and social media marketing continually bring new customers.

“Knowing the patrons and knowing that people really like the product we create and get so excited about it make it pretty fun,” she says. Still, it’s been a big learning curve turning a hobby into a commercial venture.

“I have to find time to do the business side of the shop, and baking is a full-time job in itself,” Nobles says. “The HRSM degree has helped a lot more than I first realized — the management and the employee side of it, especially.”

Nobles points to several experiences during her time at Carolina that helped prepare her for business. She made desserts one semester for McCutchen House, the student-run restaurant on campus. And the late Jules Pernell, an instructor in the HRTM program, helped her land her first real baking job at Forest Lake Country Club.

“Jules was a mentor for me. I wish he could see this place,” she says.

But while her former mentor is gone, Noble’s 91-year-old grandfather in Bennettsville — the one she baked with in her childhood — is still around and loves to visit Silver Spoon.

“Any time I have croissants left over on a Friday, he and my grandmother say, ‘Freeze them and bring them to Bennettsville next time you’re coming this way.’ ”

Learn more about career opportunities available with a degree from the College of Hospitality, Retail and Sport Management.