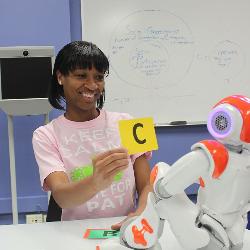 Karina Liles is working to make human-robot interaction as people-friendly as it can be.

Karina Liles started helping bridge the gap between people and technology when she was just a kid, and now she’s making a career of it.

Before she was even out of elementary school, Liles was making computer house calls in rural Bennettsville, S.C. It was the mid-1990s, the World Wide Web was in its early days, and people wanted to go online, even if more than a few of them had no idea how to get there.

“The Gateway computers were coming out then, and everybody was buying them but no one knew how to hook them up,” she says. “It was super-simple, and my dad would drive me around and they would pay me to get them started.”

Working with computers came naturally to Liles. Her junior year in high school, she used PowerPoint to put together an educational program for her 3-year-old sister.

“It was a game for her to learn her shapes and colors,” Liles says. “I started thinking then, if I can do this using PowerPoint, imagine what I could do if I really knew what I was doing.”

She decided to master the fundamentals of the discipline at Spelman College in Atlanta, earning a bachelor’s degree in computer science in 2007. After working for a couple of years as an IT analyst for AT&T, she returned to South Carolina in 2010, where she began to define a career path for herself.

Liles worked as a consultant in a number of school districts near her hometown, helping implement STEM projects into the curriculum, particularly ones that involved robotics. She really enjoyed the work, in part because the students’ enthusiasm was contagious.

“Kids just have a natural inclination for science and technology,” she says. “They can really run with it. And we’re just not doing enough to help spark, or sustain, that interest.”

While consulting, she earned a master’s degree online in educational technology through the University of South Carolina’s College of Education, and from there she decided a Ph.D. in computer science should be the next step.

Joining the doctoral program in the College of Engineering and Computing in 2012, Liles is now doing research with assistant professor Jenay Beer, the director of the USC Assistive Robotics and Technology Lab. Liles is studying the interaction between people and robot-related technology with a focus on the human point of view. The goal is to adapt the technology to best suit the humans involved, not just build the most sophisticated robot possible.

Liles recently completed a project using a robot as a teaching assistant for fifth-graders. Using a commercially available robot programmed to tutor a student one-on-one in multiplication skills, Liles assessed the students’ acceptance of the robot as a socially interactive tutor.

“The idea is to help the students who need extra reinforcement without taking away from class time,” Liles says. “Hopefully the robot can help the teacher with that, so that they don’t have to stop the class, which could embarrass the student.”

The students in the study came from a rural environment, and the arrival of a socially interactive robot was quite a draw for them.

“Bringing an actual robot into the classroom just creates a whole new dimension,” Liles says. “It opens their eyes to something new and different and exciting.”

Karina Liles recently earned a National GEM Consortium Fellowship, which includes tuition assistance for future graduate work and a paid summer internship this summer at Pacific Northwest National Laboratory. The Office of Fellowships and Scholar Programs and GEM adviser Mike Matthews of the College of Engineering and Computing were instrumental in her success in this nationwide competition. To learn more about potential scholarship and fellowship options, contact OFSP or make an appointment for individual advising.

To help support research like Liles' in the College of Engineering and Computing, visit Carolina's Promise.