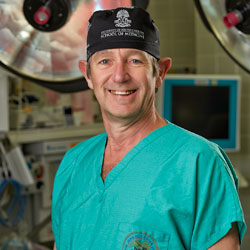 Randy Bolton’s first sailboat was a catamaran named Dream Catcher. A few years later, eyeing the next horizon, the South Carolina native and his wife bought two slips on the backside of Folly Beach and upgraded to a more tricked-out multihull, which the couple named Imagine. He envisions someday being on the water full time — just sailing, diving and enjoying a well-deserved retirement with his wife.

“Eventually, I would like to live on the boat and just sail around the Caribbean,” he says from behind his desk at the William Jennings Bryan Dorn Veterans Affairs Medical Center. “But I’m not ready for that yet.”

And that’s the thing about Bolton, who was named chief of surgical services at the VA in November. The University of South Carolina School of Medicine alumnus has a clear vision for the future — those two catamarans in the photographs on his office wall could not be more aptly named — but the only anchor he is truly ready to drop at this point is at the VA.

It is not unfamiliar waters for the Greenwood, S.C., native. Bolton received two degrees from The Citadel (physical education and biology) and was stationed in Charleston with the Army National Guard before coming to Columbia to enroll at the School of Medicine in 1980 on the G.I. Bill. He graduated in 1984 and completed his surgery residency in 1989.

After a branch transfer to the Air Force, the military sent Bolton to Boston University for additional surgery training. He spent three years at Boston Children’s Hospital performing cardiac and pediatric cardiac surgery.

A veteran heart and thoracic surgeon, Bolton can now point to extensive experience in private practice, academic practice and with the U.S. military.

His transition into hospital consulting and administration began several years ago while with the Air Force at Wilford Hall Ambulatory Services Center in San Antonio. Since then, he has been recruited to build or improve multiple cardiothoracic surgery programs, including, most recently, the Cardiothoracic Surgery Clinic at Saint Rose Dominican Hospital in Las Vegas, an affiliate of Stanford University Hospitals.

At the VA, among other things, he has been tapped to improve collaboration with the School of Medicine, where he will soon have a joint appointment as a clinical professor. One of his first goals, he says, is to get the surgery residency program off probation.

It is a big job, but he is not under any illusions about what it will take to achieve everything he wants to accomplish. “The surgeon in me wants to see immediate results,” he says. “The hospital administrator in me realizes we’re talking fiscal years, not three weeks.”

As he has done at previous stops, Bolton has put together a wide-ranging but detailed agenda that includes everything from updating operating rooms to implementing more robotic technology; from recruiting new doctors with a strong academic background to encouraging students to publish; from reviving the thoracic and vascular surgery residency programs to, eventually, implementing a heart surgery program at the VA.

“I will be satisfied when we get students, residents and faculty really close again, where we are all publishing, where that academic piece is really strong, where the students want to stay here to do their surgery residency,” he says. “And when they leave here, I want them to feel that they received an outstanding education.”

What he wants, in other words, is something like what he experienced as a medical student and resident back in the 1980s.

“When I left here, I’d had as good an experience as anyone could have anywhere, both in the medical school and in the residency program,” he says. “I did things and was exposed to things that I would not have seen elsewhere. I have always been able to hold my own in the medical profession with people who trained at the high-powered programs. Some of those folks did not get the same experience I had here.”

Call it a homecoming, call it the next chapter, call it going out on top — for now, the veteran surgeon just sees his new appointment as another case in need of his guidance and expertise. It also just feels right at this point in his career.