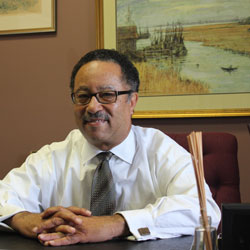 Columbia attorney and Carolina alumnus Luther Battiste is the new president of University Associates, an organization that brings the university and local business community together.

Luther Battiste, ’71 international studies, might best be described as fully invested — in his career, his community, his alma mater.

A partner with the Columbia-based law firm Johnson, Toal & Battiste, he was recently named president of University Associates.

Originally founded in 1964 by a group of Columbia businessmen and alumni to promote the university among non-alumni powerbrokers from around the Midlands, the dues-paying organization now boasts approximately 400 members, including business leaders, civic leaders, figures from cultural institutions and attorneys like Battiste.

In fact, the Orangeburg, S.C., native’s involvement with University Associates dates back several years and is rooted in a personal interest in the mutual success of his alma mater and his adopted hometown that goes back even further.

After attending law school at Emory University in Atlanta, Battiste returned to Columbia to practice law and never left, though he does spend at least one day a week at a second office in his hometown. He’s still here, he says, “because I love South Carolina.”

“I never intended to stay in Atlanta and practice with a big law firm,” he says. “I always intended to come back here. I came back to Columbia to try to make a difference in the community using the law as an instrument for that.”

In 1982, Battiste became one of the first two African-Americans elected to Columbia City Council and went on to serve on council for the next 15 years, including two terms as mayor pro tempore. He has also served as chairman of the Richland-Lexington County Airport Commission and on the executive committee of the Columbia Chamber of Commerce.

As University Associates president, Battiste will help determine the speakers for the organization’s quarterly luncheons, which are designed to keep the larger community abreast of everything from interesting research to athletics and the arts to the system’s $4.1 billion statewide economic impact.

At the local level, he cites the recent boom in student housing as a prime example of how the university and the city increasingly benefit one another.

"All that new student housing is just a microcosm of the impact the university has," he says. "You can see how the university is an economic engine for the community, just like state government, just like Fort Jackson and the hospitals. It's an exciting time."