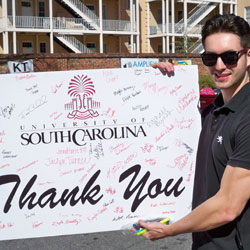 University students have been thanking donors every year during the Carolina's Promise campaign, which successfully ended June 30.

Carolina’s Promise, the University of South Carolina’s $1 billion campaign launched in 2008, has reached its goal on time and on target.

With the June 30 conclusion of the campaign, Carolina is the first institution in the state to both announce and achieve a campaign of $1 billion. In reaching this milestone, the university joins a small group of public institutions achieving this level of success in fundraising. The campaign secured private funds for many key university goals, including new scholarships, professorships, academic programs and facilities.

“This campaign began during the recent deep financial crisis, but we moved forward because we had the need and we had a great case to make,” said Carolina President Harris Pastides, who will announce the final campaign total Sept. 10 at the State of the University address on the historic Horseshoe. “Attainment of our goal, with strong leadership from David Seaton (‘84), our campaign chairman, has been a team effort involving alumni, trustees, faculty, staff, corporations, foundations and other friends.

“Although the total raised in this campaign has never been achieved before, the ultimate goal was not just to raise the money. The goal was to support college access and affordability for our students and their families and to advance the excellence of Carolina’s already fine programs and outstanding faculty.”

UofSC alumni and friends contributed more than half the total raised. The university also received major support from corporations, foundations and organizations from throughout the nation.

Gifts of cash make up about half of the campaign total, and pledges account for another 20 percent. Gifts-in-kind (i.e., software, equipment, etc.) comprise 13 percent, and planned gifts, such as bequests, make up about 15 percent of the total.

As with most campaigns of this scale, the majority of commitments are donor designated for specific purposes such as program enhancements for teaching, research and service; scholarships and fellowships for students; faculty support; and facilities. Seven percent of funds were given without restriction and will be earmarked by the university for areas of greatest need.

“We’ve raised the bar for Carolina,” said Jancy Houck, Carolina’s vice president for development and alumni relations. “The campaign started at a difficult time but succeeded through the generosity of donors who believe in the mission of our university and have faith in the president and board of trustees in setting the strategic direction of the university. The funds raised during Carolina’s Promise will help to fuel future success.”