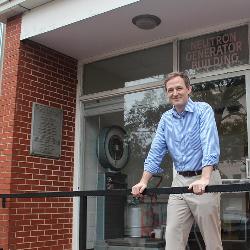 As part of his graduate service work, Evan Phelps participated in the multiyear construction of a new time-of-flight particle detector. Pieces of the instrument were constructed at Carolina, then transported and assembled into a massive detector at the Jefferson National Accelerator Facility in Newport News, Va.

After years of study in graduate school, Evan Phelps recently joined the workforce in an area far afield from the particle physics research that defined his daily routine at the University of South Carolina. Although working toward a Ph.D. in physics might be a road less traveled on the way to a position in the health sciences, from his point of view, the effort had a lot of merit.

And it’s not just from his point of view — a team on the other side of the table at a job interview took notice. The skill set he developed at Carolina was an important part of his success in landing a position at Health Sciences South Carolina last fall.

“I was able to show them what I can do based on the experience built up during the graduate program, in terms of their own business,” Phelps says. “Experimental research requires broadly valued skills, common skills taken to uncommon levels. Developing high-performance computing solutions, that’s a skill. Data analysis is a skill.”

Now serving as a senior software engineer at Health Sciences South Carolina, a statewide biomedical research collaborative, he is putting those skills directly to work. One of the collaborative's core functions is to collect and manage a massive database of clinical data from health systems throughout South Carolina, making the results available to research teams developing new and better approaches to health care. Phelps’ experience handling the prodigious quantities of data that are collected at particle accelerators puts him in a good position to help implement the data-centric approach Health Sciences South Carolina is taking with clinical research.

But beyond the specific skill set he developed in the graduate program at Carolina, there were intangibles of even greater worth.

“It’s harder to explain what are probably the most valuable pieces of earning the Ph.D., the pieces that spring from immersion into a domain where your problem-solving abilities are pushed to a limit,” Phelps says. “You’re pushed in a way that’s unconventional, at least with respect to what I had seen before I engaged in my own research. And I know now that the exercise pays off beyond my particular field of research.”

The payoff comes after emerging from a doctoral apprenticeship in the Experimental Nuclear Physics group at Carolina. Comprising the research laboratories of faculty members Ralf Gothe, Yordanka Ilieva and Steffen Strauch, the group is focused on developing a better understanding of the “strong” force, one of the four fundamental interactions in nature.

Until the early 20th century, physicists had clearly defined just two fundamental forces: gravity and electromagnetism. In the late 1600s, Isaac Newton created a theoretical framework for describing gravity, the attractive force with a long reach that binds stars within galaxies, binds planets to orbits around stars, and binds people, in a manner of speaking, to the Earth. Understanding the properties of gravitation eventually led to rockets, space flight and satellites — the last of which are a crucial part of the worldwide connectivity now largely taken for granted.

The 1800s brought an explosion in scientific understanding of electromagnetic forces, which act strongly over shorter distances. They hold the atoms and molecules of solids and liquids together. Everything with a solid or semisolid form on Earth, from paper to tomatoes to desk chairs, is held together by attractive electromagnetic forces.

Electromagnetic forces are also what holds atoms themselves together. The nucleus of an atom contains protons with positive charge (and typically also neutrons, with no charge), and surrounding that nucleus are electrons, with negative charge. Opposites attract, and electrons and protons like to stay together in equal parts on the atomic scale. Understanding the interactions involved and harnessing electromagnetic properties has led to all of the electrical and electronic devices of modern life, from light bulbs to radio communications to television to smartphones.

As the picture of atoms and the nucleus came clearer over the course of the 20th century, one conundrum long puzzled scientists: what on Earth (and elsewhere) held a nucleus together? Although opposites attract, like repels like when it comes to charge. Protons repel each other, and every element apart from hydrogen has more than one: Every helium nucleus has two, for example, carbon has six, oxygen has eight and uranium has 92.

Keeping those protons in close proximity — and within the tiny nucleus of an atom, the proximity is very, very close — would require a tremendous amount of energy, and scientists understood that there must be a force or forces that exceeds the repulsive energy of protons to keep the nucleus intact. In the 1960s and 1970s, they devised a new theoretical framework that delineated two new forces, the strong force and the weak interaction, to describe how particles behave in the nuclear and subnuclear size regime.

The strong force, the focus of Phelps’ research, is what holds the "stuff" of nuclei together. Once thought to be fundamental, indivisible particles, protons and neutrons were instead found to be composed of even smaller particles, quarks.

The strong force is at its most potent over even shorter distances than the electromagnetic force; three quarks, bound together by the strong force, together constitute a proton or a neutron. The strong force also holds a nucleus together, binding together protons and neutrons.

Although the research he undertook as a graduate student might sound arcane — Phelps is a hadronic physics specialist, working on omega-meson electroproduction — the practical applications, and possibilities not yet realized, are not.

And beyond immediate applications, Phelps says, there are even more important reasons for scientists to push forward in particle physics research, which carries a significant fiscal price tag.

“I see it as completely analogous to the relevance of electromagnetism in the 1800s. There weren’t applications then. But our whole existence revolves around, for better or worse, computers today. So if you believe that the progress of civilization as a whole has any technological component, there always has to be pushing forward in understanding the universe before the engineering wave comes behind it.

“While you’re exploring it, you gain from the tributary technology, but it also lays the groundwork for unimaginable applications. If we ever develop the things you see on Star Trek, it will come from an understanding of physics.”