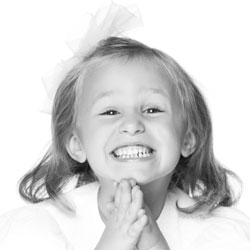 The Kensley "KeKe" Fuller Memorial Endowed Scholarship provides $5,000 per year to a medical student with demonstrated interest in community service.

KeKe Fuller was never your average little girl. Instead of a play kitchen, her playroom was set up like a doctor’s office where she wore scrubs and a surgical mask.

On a visit to the bookstore, she picked out an illustrated volume of human anatomy and physiology and had her dad, a family practice physician, read it to her at night. Her fascination with medicine began even earlier.

“When she was two and a half, KeKe saw me stretched out on the couch and asked me how tall I was,” said Sean Fuller, a 1995 University of South Carolina School of Medicine graduate. “I told her, then she thought it over for a second and announced that she was going to be a six-foot woman doctor.”

By the time she was six, KeKe had settled on becoming a cardiothoracic surgeon — she learned to pronounce the word — and informed her science teacher she would not practice medicine with her father because he was “just a family practice doctor.” Every time the family drove past the School of Medicine, she declared that is where she would go.

But all of that precociousness and childhood energy disappeared on Memorial Day weekend in 2013 when the Fullers’ little girl developed a fever. Severe respiratory distress soon followed and within a week KeKe was at the Medical University of South Carolina receiving extracorporeal membrane oxygenation through a lung bypass machine.

“The hope was that her lungs would have a rest. But things never improved,” said her mother, Jillian Fuller.

Forty-seven days later, KeKe passed away, the precise cause of her respiratory failure a mystery even after extensive testing by the Centers for Disease Control.

“The hardest day of my life was when she died,” Sean Fuller said. “The second hardest was the next day when I had to tell her twin, Jack, that his sister was gone.”

In the free fall of grief that followed, the Fullers considered one idea and another to memorialize their daughter. How can anything capture the essence of a cheerful little girl who wanted to become a doctor and save lives? A memorial tree or bench just didn’t feel right.

“We no longer have our daughter’s future so memories of her become — ‘precious’ is not the word. You long for people not to forget,” Jillian Fuller said. “We want you to talk about our child.”

To that end, the Fullers and many of their friends and family created the Kensley “KeKe” Fuller Memorial Endowed Scholarship, a merit-based four-year scholarship for a USC School of Medicine student who has demonstrated interest in community service. The scholarship currently provides $5,000 per year, and the hope is to continue adding to the fund.

Inspired to do his best

Looking back, John Stathopoulos realizes that what inspired him toward a career in medicine was also a source of angst for his parents.

Stathopoulos, a rising M-II student at the School of Medicine, remembers as a kid going from one children’s hospital to another for his younger sister Julia. Now a student at Furman University, Julia was born with Freeman-Sheldon Syndrome, a very rare type of distal arthrogryposis that continues to require many corrective surgeries.

“Every time I was in a children’s hospital with my family, I had a positive experience. Everyone, the doctors, the nurses, the people in the cafeteria, were super nice,” he said. “Of course, that was a little kid’s perspective. In high school, I started to think about medicine more seriously and started shadowing doctors.”

Stathopoulos, who completed a biology degree at USC in 2014, uses his receipt of the Kinsley “KeKe” Fuller Endowed Memorial Scholarship as motivation, especially when he’s studying. “I don’t want to let them down; I push myself to do better,” he said.

Stathopoulos is leaning heavily toward becoming a pediatrician and realizes that the rewards of that calling are tempered by those inevitable cases when efforts to heal fall short. One of his mentors, Elizabeth Mack, M.D.,’83, was Keke Fuller’s attending physician when she was first admitted to the hospital.