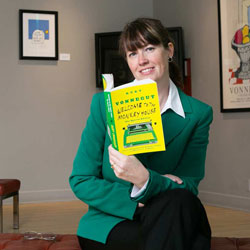 Alumna Julia Whitehead hosts thousands of literature fans every year at the Kurt Vonnegut Memorial Library and Museum, which she founded in 2008. Photo courtesy of Visit Indy.

If anyone ever tells you books don’t change lives, introduce them to Julia Whitehead.

After graduating from the University of South Carolina with an English degree in 1994, Whitehead joined the Marine Corps, worked as an editor for Military Officer magazine and at Random House, taught English in Thailand, did a nine-year stint as a science writer for Eli Lilly and spent a couple of years working for the Indiana Legislature.

But it was her love of author Kurt Vonnegut that led to her dream job.

Whitehead, you see, is the founder, CEO and head cheerleader for the Kurt Vonnegut Memorial Library and Museum in the late author’s hometown of Indianapolis — and she couldn’t be happier about it.

“It really is a labor of love, and Vonnegut deserves it,” says Whitehead. “He was such an important voice, not just an American writer but an American thinker. He should be held up with Mark Twain and John Steinbeck and some of the other literary giants. That’s something I consider as part of our mission, to introduce people to his work.”

With a circulating collection and plenty of opportunity for visitors to pick Whitehead’s brain about the author, that happens nearly every day at the library. Visitors can also peruse an art gallery, interpretive displays and a full-scale reproduction of Vonnegut’s office that includes the author’s electric typewriter, a pair of his reading glasses and other personal effects.

“For a Vonnegut fan, this is really a mecca, it’s a pilgrimage,” says Whitehead, who calls “God Bless You, Mr. Rosewater,” a satire about a philanthropic millionaire, her personal favorite Vonnegut novel. “Visitors to the Vonnegut Library come from all over the world, and in many cases, the reason they came to Indianapolis was to visit the Vonnegut library.”

But the 1,100-square-foot facility in downtown Indianapolis, which now draws more than 36,000 visitors per year, is more than just a display space. It provides outreach programs to promote healing for veterans through the arts and humanities, professional development opportunities for teachers, readings by visiting writers and a home base for traveling exhibits that Whitehead estimates reach more than 100,000 people a year.

When the whole crazy adventure started, though, Whitehead was just another Vonnegut fan, albeit one with a great deal of passion and knowledge. After being introduced to the Vonnegut classic “Slaughterhouse-Five” by her 10th-grade history teacher at South Carolina’s Irmo High School, she rediscovered the author as an adult through her husband’s extensive Vonnegut collection.

“Those first two years were crazy times because I had no experience in starting a nonprofit,” she says now, an effervescent combination of disbelief and genuine zeal mingling in her voice. “We had to prove to local foundations and supporters that we weren’t just a Vonnegut club, that we could do really meaningful work that would affect the lives of thousands of people.”

That meaningful work began when Whitehead cold called Vonnegut’s son Mark, a writer himself as well as a pediatrician, at his Massachusetts office.

“I tracked him down and said, ‘Hey, I’m not just a crazy fan of your dad’s work. I actually have a legitimate idea for a nonprofit library,’ and he said, ‘Oh, my dad would love a library!’ ”

Individuals had approached the author’s son before with different plans to honor Vonnegut, but as Whitehead says, “He felt like the ideas to that point were a little too commercial, not the right fit.”

Whitehead’s idea was to do something more in line with Vonnegut’s core values, which is why the nonprofit library also serves as a venue for public discourse, one that has attracted national media attention from such outlets as the New York Times, NPR and TIME magazine for its efforts to promote literacy, human rights, and support for libraries and public schools.

“That’s a very important part of our mission,” says Whitehead. “Vonnegut never claimed to have all of the answers. He liked the questions and he liked the conversation and discussion, which is what we do here.”