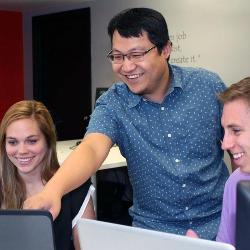 The founder of Columbia-based TCube Solutions says he hires UofSC grads because of their energy and willingness to learn.

Andrea Martin graduated from the University of South Carolina in May with a degree in mathematics. Next month, the Columbia native will be flying to England to help a British client implement a new software program.

“I’m still learning the business of insurance and trying to catch up with people who have been on this project for a long time,” Martin says.

That eagerness and willingness to learn is what has led her employer, TCube Solutions, to tap nearly a dozen recent Carolina grads from a variety of disciplines.

For more than two years, TCube has been building a team of folks with experience in insurance industry and adding recent graduates with variety of skills from analytics (math) to risk management (insurance) and international business and global supply chain management.

“They are high energy, they listen and they want to learn,” says TCube founder Sam McGuckin. “My only concern is how quickly can we train you so we can get you out to our clients.”

Like many of his older employees, McGuckin grew up in Columbia’s insurance technology business. First, he worked at Policy Management Systems, a spinoff of a venerable South Carolina insurance company, then with subsequent companies that created and implemented software to help insurance companies manage their policies.

It was after one of his technology companies was bought by a larger one that McGuckin and his wife, Sandy, decided to empty their savings and start their own firm doing the installation and implementation work for software developers. TCube works with property and casualty insurance companies to set up their billing and policy computer systems. The software is developed by other companies, but TCube knows how it works and how to make it work better for each client.

“It was a big gamble, but we knew what we were doing, we have been doing it for years,” McGuckin says.

What he didn’t know was how to create a company from scratch, so he sought the assistance of the USC/Columbia Technology Incubator.

“If you knew everything it takes, everything you have to do, to start a business before you do it, you wouldn’t do it,” he says. “The Technology Incubator takes a lot of that off your plate.”

The incubator offers low-cost office space, in a former city of Columbia office building. But, McGuckin says, the incubator offers so much more in the way of business advice and mentoring from accounting to manufacturing to getting down to the business of actually selling the product.

“They are always trying to help us. They are so invested in our business and our success.

“Young entrepreneurs are fascinated by the product and the technology, but they are terrified of selling,” McGuckin says. “Selling is simply to listen to somebody’s problem and articulate your unique value in solving that problem.”

Getting his young workers to see the excitement of a career in insurance software shows McGuckin’s considerable salesmanship.

“It became clear to me in the interview process that the students had no intention of working for me for a long time,” McGuckin says. “We were not seen as a destination job, but a hookup until something better came along.”

McGuckin says he has lost just one of his UofSC hires to another job.

“They all love it,” he says. “These are cool jobs if you are road-enabled, that is, you have a passport and want to see the world.”

For the UofSC grads working there, TCube has offered an opportunity to really use what they learned in school.

Martin works in quality assurance, making sure the software works the way it is supposed to. She gets to work early – usually no later than 7 a.m. to be able to coordinate with her client in England and her software developers in India. She takes issues that arise from the customer and tries to recreate then fix the problem.

Tong Wu, a 2015 master’s in statistics graduate, works as a “data scientist” at TCube. He describes his job this way: “Loosely speaking, data scientist is more like a witch, while data analyst is like a magician.”

Wu says his statistics 730 class is key to his success at TCube.