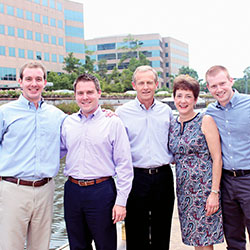 With four alums in the family, the Barnhills decided to pool their gifts and create the Barnhill Family Engineering Endowment to fund scholarships as a way to say thank you to the university.

John Barnhill spent his entire career traveling the world for Exxon Mobil. So he wasn’t surprised when his three sons decided to work in the energy industry after college.

“The oilfields were in their blood,” says Barnhill.

What did surprise the Texas resident was when all three boys followed his lead by becoming Gamecocks. Sure, they would buy T-shirts, hats and stuffed Cocky dolls when they visited family in South Carolina, but John Barnhill didn’t think Carolina was an option. In fact, oldest son Jeff was debating between Rice and Texas Tech when he applied to Carolina on a lark.

Everything fell in place during the college visit: impressive facilities, personal attention from faculty and an offer of scholarship money. On the plane back to Houston, Jeff turned to his dad and announced, “I’m going to Carolina.”

Three years later, middle son Matt had a similar experience. When youngest son, Tim, was named a McNair Scholar, the trifecta of Gamecocks was achieved.

They were involved in a variety of activities outside the classroom. Tim and Jeff played in the marching band where Jeff was the drum major. Matt was the president of his fraternity.

They also had a lot of similarities — all were distinguished students in the College of Engineering and Computing and spoke at their respective convocation ceremonies.

But there was one experience that all four Barnhill men shared. “Carolina certainly gave me the foundation to be successful in my career, but it was the community — the personal attention that made the difference,” John says. He saw the same interaction between his sons and the faculty.

“Professors took an interest in them and their careers by recommending them to industry recruiters,” John says. After graduation, Jeff and Matt started work at Exxon Mobil — just like their dad. Tim works for Conoco Phillips.

John has been a member of the Gamecock Club and a donor to the engineering school for years. With four alums in the family, they decided to pool their gifts and create the Barnhill Family Engineering Endowment to fund scholarships as a way to say thank you. With company matches, the goal is to have the endowment reach $1 million within 20 years.

Barnhill hopes the scholarship money will encourage more out-of-state or international students to attend Carolina and major in chemical or mechanical engineering.

“I think it’s very helpful for kids to get a good mix of different cultures,” he says.

One other family member who embraced the Palmetto state’s culture is John’s wife, Nancy.

“She’s from Texas but has adopted South Carolina with no hesitation,” he says. The couple plans to move to Lake Murray when John retires this summer.