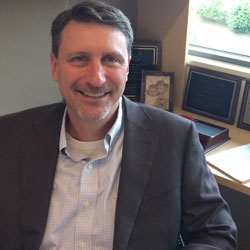 Paul Bliese's work with analytical statistics started with the U.S. Army but has business world applications.

Transitions can be tough. Paul Bliese knows that firsthand, though less from any particular personal experience than from careful and methodical observation.

Bliese, you see, works in applied statistics. He’s also a retired U.S. Army colonel who joined the faculty at the University of South Carolina’s Darla Moore School of Business in 2014 after 22 years at the Walter Reed Army Institute of Research.

“In graduate school, I never would have guessed in a million years that I would go into the military,” says Bliese, who entered the Army by direct commission after completing his Ph.D. in organizational psychology at Texas Tech.

“But then it just turned out to be really interesting — we had interesting problems to work on, good data sets, really good support. We were listened to at the Pentagon.”

Most of his work with the Army focused on psychiatric outcomes for military personnel. Over the years, he led a number of teams into Iraq and Afghanistan to collect broad data on soldier well-being and morale, which could then be used to inform policy. He also worked on a number of studies relating to transitions in the military.

“I’m broadly interested in studying transitions, particularly difficult transitions,” he says. “That generalizes to a number of different settings, occupational and otherwise. There’s a large class of things that occur in the working world that could be describe as a difficult transition. That’s an area I want to explore now that I’m here — to model them but also to help think about what we can do about them.”

And it doesn’t hurt that he still has connections at Water Reed. Because variables that affect soldier morale have analogs in the business world — think bad leadership or poor peer relationships leading to workplace dissatisfaction and turnover — he got approval from his former employer to use military research data in the classroom.

“A lot of the data sets that we have also have variables very similar to what organizations and private companies would be interested in,” he says. “So we can sit in a classroom and say, ‘Okay, here’s a survey of 3,000 soldiers. Let’s start to think about models to predict who’s going to turn over.’ ”

Bliese has also contributed to several studies on post-traumatic stress disorder, including a recent one aimed at improving upon the standard “self-report” method typically used by the U.S. Army. Led by researcher Yair Bar-Haim of the School of Psychological Sciences at Tel Aviv University and published in the American Journal of Psychiatry in July, the study found that individuals with PTSD symptoms reported particularly high variability on a task often used to assess those with anxiety disorders.

“It follows a pretty general pattern analytically,” says Bliese. “For example, one of the things we noticed about teams that were at high risk for all sorts of problems is that team members displayed a lot of variability in their views of things. High variability is often meaningful.”

Modeling that variance, he says, could help diagnose anxiety disorders among other at-risk groups like firefighters and police, but it also has potential as a predictor that could be used by businesses or other organizations trying to reduce job loss.

Indeed, hearing Bliese speculate on potential applications, it becomes increasingly apparent why he joined the Moore School after retiring from the military — and how his particular skill set can benefit not just research but students.

“It’s turned out to be a great fit here because our dean is very committed to teaching graduate students and undergraduates more about analytics,” Bliese says. “The opportunity to help students learn using real-world data is pretty cool.”