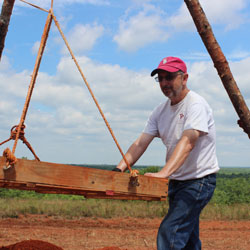 University of South Carolina archaeologist Steven Smith looks for clues that will help illuminate our understanding of the battle of Fort Motte.

A lone Patriot rises from a siege trench, musket shot raining down around him as he takes aim at the heavily fortified plantation home the Redcoats have seized from wealthy landowner Rebecca Motte. The Patriot’s weapon is no musket, though; and no rifle. It is an ornate African archer’s bow given to Motte by an East Indian trader and now provided with instructions to fire a flaming arrow onto the wood-shingled roof of Motte’s own home and so to burn it down for the cause of liberty.

Or that’s one popular version of how the Americans, including a militia led by Gen. Francis Marion and a unit of the Continental Army led by Lt. Col. “Light Horse” Harry Lee, defeated the British during the five-day Siege of Fort Motte in May 1781.

In another version, the Patriot shoots a flaming arrow onto the roof but when the shingles fail to ignite, he charges the fort with a sling of flaming resin, which he hurls over the palisade and onto the third-story roof while being shot at by the British troops. A third version has the flaming arrow but no bow; instead, the arrow is fired onto the roof from, of all things, the barrel of a French Charleville musket.

South Carolina Institute of Archaeology and Anthropology Director Steven Smith loves stories like these, apocryphal or not. And if they involve Francis Marion — aka “The Swamp Fox,” aka the subject of his dissertation and much of his research since — even better.

But as an archaeologist (more specifically, a conflict archaeologist) Smith is most interested in untangling fact from fiction through the discovery of diagnostic evidence such as that which exists under the thick orange clay of the secluded river bluff at Fort Motte, S.C.

And knowing the archaeology is what it’s all about — why Smith and others like him get so excited about unearthing the past.

Beginning in 2003, with an initial grant from the American Battlefield Protection Program administered by the National Park Service — and with the enthusiastic support of the landowner, who even clears portions of his property when asked — Smith’s team has been exploring the Calhoun County property a little more each year.

“Now we’re doing the archaeology to try to reveal what really happened, and we’re finding some really cool stuff about how this battle unfolded,” Smith says.

For one thing, they have determined precisely where the fort was located. They have located and re-dug a portion of the zigzag siege trench (known as a sap) that the Patriots used to approach the fort. They have also located the Patriots’ artillery mound, though it was partially demolished by farmers in the early 1980s, and they have found the site of the overseer’s house where Marion and the British officers dined after the battle.

“After the British took her house and turned it into a fort, Mrs. Motte was supposedly at the overseer’s, and so were most of the Continentals,” says Smith. “Meanwhile, Marion’s got most of his guys shooting at the fort.”

The team has also zeroed in on a few of the surrounding encampments, though Smith isn’t ready to say at this point which of them belonged to the Americans, which to the British prior to the siege and which to area loyalists.

“We don’t have enough diagnostic evidence to know who occupied which camps,” he says. “We’re narrowing in on it, though.”

Diagnostic evidence, in this case, means military implements most likely to have been used by one side or the other. The British, for example, typically used a .75 caliber flintlock musket called a Brown Bess; the loyalists and the Americans would most likely have been equipped with .69 caliber French Charleville muskets or with rifles.

Because the different types of musket are different calibers, Smith and his team are able to identify the correlating lead shot when they find it using metal detection. High concentrations of fired British shot in a given area suggest that that area was occupied by American troops while a concentration of unfired .75 caliber shot would provide evidence of a British camp.

Uniform buttons would also help fill in the blanks, Smith explains, since the British numbered theirs in accordance with the soldier’s regiment, though to-date no British buttons have turned up.

“If we ever found an 84th regiment button out here, we’d just be ecstatic,” he says. “But all of these diagnostics help us relate to who was where. By looking at artifacts and where they’re found, we’ve been able to piece together a lot. Some fits wonderfully, some of it contradicts what we thought happened, which makes it an intriguing story.”

Most intriguing of all, though, may be a single artifact unearthed at the site this spring by a volunteer — specifically, a rusty iron arrow point of the age and type that would have been used at the time of the battle. Just talking about the possibility that it could have played a role in the battle’s climactic moment is enough to light up Smith’s imagination.

“I’m into history, but there’s still this feeling of, ‘Did this really happen? Did it happen the way we think it happened? What’s the real story?’ ” says Smith. “And then you find British shot, you find a cannonball, you find an arrow point like this one and you think, ‘I don’t believe it. Is this really what I think it is?’”

A cannon ball, gun parts and lead shot are the kinds of artifacts that are expected based on the history of the siege, but for Smith, the arrow point goes beyond mere historical facts, linking history with mythology and further entangling fact and fiction.