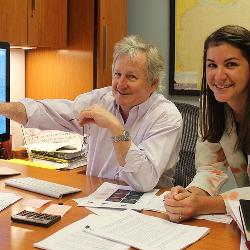 A team led by UofSC's Jeff Twiss is bent on understanding the molecular-level biomachinery in nerve regeneration. They've just published research that offers new insight into how central nervous system injuries might be treated.

Many an injury will heal, but the damaged spinal cord is notoriously recalcitrant. There’s new hope on the horizon, though. A team of researchers led by the University of South Carolina’s Jeff Twiss just reported an innate repair mechanism in central nervous system axons that might be harnessed to regenerate nerves after brain or spinal cord injuries.

Twiss, a professor of biological sciences and the endowed SmartState chair of the Center for Childhood Neurotherapeutics, and graduate student Ashley Kalinski are building on breakthroughs that they and others have reported on nerve regeneration over the past several years. In a paper just published in the Journal of Neuroscience, they bridge a chasm in the “recovery gap” between the peripheral nervous system and the central nervous system.

“If you injure a peripheral nerve, it will regenerate, spontaneously. It moves quite slowly, so it’s one of our objectives to speed it up, but it does regenerate,” Twiss says. “In contrast, with an injury to your spinal cord, it’s not going to regenerate.”

Over the past five years, Twiss and Kalinski have uncovered some of the molecular details of how nerve recovery takes place in the periphery. A particular focus of their research is on how the nerve constructs proteins, one of the fundamental building blocks involved in any kind of cell growth or re-growth.

Zeroing in on messenger RNA, they looked for evidence of it in the axon, the channel that connects nerve cells to one other. Axons can be very long and relatively remote from the central portion of the cell, which houses the nucleus where DNA is transcribed into messenger RNA that can then be converted into proteins.

Twiss, Kalinski and colleagues had shown recently that messenger RNA located in peripheral nerve axons is an important part of the process by which the peripheral nerves are able to regenerate after injury. It was a challenge to dogma.

They were able to do so by building on an experiment showing that grafting a peripheral nerve into the space between a severed spinal cord in an animal model brought about nerve regeneration (albeit limited). Kalinski collaborated with professor John Houle and graduate student Rahul Sachdeva at Drexel University using a similar experimental setup, to look at the molecular details of recovery in transected spinal cord axons.

“And what she found is that yes, the messenger RNAs do go out into the axons, and they are likely used to make new proteins,” Twiss says.

The research is an important step forward in developing new approaches to treating spinal cord and brain injuries, Kalinski says. A fundamental understanding of the processes at work is critical to future progress.

“Some groups have shown that these nerve grafts help in the function of the animal,” she says. “This is the first time that we’ve actually looked at this molecular level, and if we can understand how to increase the regenerative capacity, then maybe we can fine-tune a way to do it without having to put someone’s peripheral nerve in as a graft. So if we can understand how that leads to regeneration, then maybe we can find an easier way to do it.”

The research paper that Twiss, Kalinski and co-workers published in the Journal of Neuroscience is available online.