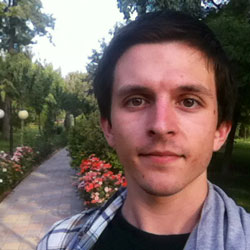 William Welsh is spending the summer in Tajikistan, learning Farsi and Tajiki. His interest in the Persian language was sparked by interactions with graduate student in the genetics research lab where he has been working.

William Welsh is spending the summer in a country he has never visited before, immersing himself in a language with which he has had only limited exposure. He couldn’t be happier.

Welsh, a biochemistry/molecular biology senior, was named a Critical Languages Scholar by the U.S. Department of State earlier this year to study Persian in Dunshanbe, Tajikistan, a country just north of Afghanistan. While there he will be studying Farsi, the dialect of Persian spoken in Iran, and Tajiki, the local dialect spoken in Tajikistan.

“I’m not only immersing myself in the language and in a new culture, but removing my reliance on English,” he says. “I have never acquired fluency in a foreign language before, and it's exciting that I now have that chance.”

Conducting research in a bioengineering lab at the University of South Carolina where many of the graduate students spoke Farsi prompted Welsh to learn their language. “I wanted to learn Persian because we have these very intelligent students from other countries, and I thought it would be a sign of respect for me to learn at least the fundamentals of their language,” he says.

This isn’t Welsh’s first exposure to a challenging foreign language or Middle Eastern culture. He spent several months studying genetics at Bogazici, Turkey, where he picked up some Turkish and continued to fuel his passion for genetics.

Life sciences have always sparked his interests more strongly than other subjects, he says. “The study of life, like the art form from which all others were able to arise, and at the root of life was genetics, which literally translates to something like ‘that which pertains to origins.’ Understanding the enigma of genetics seems to be the most critical step in understanding the greater parts of life.

“I like that genetics is a very diverse and dynamic area, relevant to both human health and the health of the greater biosphere. It feels like something I could pursue for more than a lifetime without ever losing interest.”

That pursuit is on hold this summer while he navigates life and language in a country that was part of the Soviet Union until 1991. But that might help him as he tries to tie his interests in culture, science, business and research into a thesis for his final year in the Honors College.

“What has been a particular interest of mine is the ‘politics’ that govern how research is organized, funded and conducted, and how it differs between the public/academic and private sector, and how different research organizations collaborate on research projects,” he says. “It’s a fairly broad topic, but I think this will serve as the starting point from which I will fine-tune my thesis.”

In the meantime, Welsh still has a lot of language learning to continue before he returns to campus and genetics studies.

“I love these opportunities,” he says, “because I not only get to learn about a different place and people, but learn more about myself as well.”

Scores of Carolina students like William Welsh compete for national scholarships and fellowships every year with the support and counsel of the Office of Fellowships and Scholar Programs. The office is located in Legare College, Room 220, on the Horseshoe.