Boyd Saunders: A man of many talents 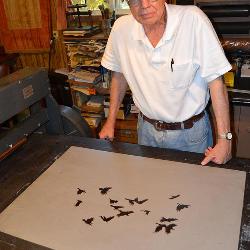 UofSC emeritus professor Boyd Saunders returns to campus to exhibit 30 years of art making. "Return of the Wanderer" is on view in the McMaster Gallery through Oct. 9.

Boyd Saunders’ studio and storage room are filled with objects that chronicle more than 50 years of art-making. A highly accomplished printmaker, sculptor, illustrator, painter and teacher, his work spaces are filled with bronze statues, framed lithographs and etchings, in addition to paints and drawings paper and canvas. Against one wall is an old wooden desk and leather chair where Saunders reflects on his long artistic journey.

More than 30 pieces of work from his career are on display in McMaster Gallery beginning Aug. 27. “Return of the Wanderer,” a solo exhibition, includes lithography, painting, etching, sculpture and drawings developed over the last three decades. The oldest piece was finished 30 years ago, and the newest work was completed barely three months ago.

The art demonstrates a long and storied career, but Saunders says this show isn’t a retrospective. “True, the show covers a lot of my work, but it’s focused on the theme of a returning wanderer,” he says.

For instance, the etching “Southern Serves the South,” shows a man walking toward a train station with a hat on his head and coat thrown over his shoulder. The foreground includes a railroad-crossing signal with a blackbird resting below the lights. In the background, just beyond the station, is a weathered red Chessie train and a handful of people waiting outside of the station.

“The landscape is not a depiction of one particular Southern town, but captures the essence and character of all Southern towns,” says Shannon Lindsey, the director of the gallery.

In 1989, he published, in collaboration with USC Press, a deluxe limited edition of William Faulkner’s short story “Spotted Horses.” The book featured the complete text illustrated with 34 original hand-drawn and hand-painted lithographs. The project was an homage to Faulkner and horses, two of his favorite subjects.

Saunders, who was raised on a west Tennessee farm, has been around horses since childhood. “On Sunday afternoons, my Papaw would hitch up his horse, put me on it and guide me around the front yard. When I was older, I had my own horse. It was a great childhood, straight out of Norman Rockwell,” he says.

His desire to be an artist started in early childhood also. His idols were not “big New York artists,” Saunders recalls. “Fred Harman was one of my heroes. He was a westerner who lived on a ranch in Pagosa Springs, Colo. He drew the ‘Red Ryder’ comic strip. That’s what I aspired to do.”

Saunders’ talents, however, went far beyond comic drawings. A highly acclaimed printmaker, his works have been exhibited throughout the globe and included in numerous private and public collections, such as the Boston Public Library, the U.S. Wildlife Collection in Washington D.C., and Shanxi University collection in China.

Saunders retired from full-time teaching in 2001. But, he continues to produce art, just not every day. “When I retired, I thought every day would be like Saturday and I’d get in the studio and work all day,” he says. “It didn’t happen.” Medical issues, house renovations and family concerns interrupted his Saturday dream. “Life got in the way,” he adds.

However, his secret to staying productive is to always have something to complete. “A painting that’s half finished or an etching that needs attention or an plate that needs preparing keeps me motivated,” Saunders says.

And he admits that his life as an artist wasn’t well planned. He only had a drive to make art. “When I got into this racket, I wasn’t sure what I wanted. I only knew I wanted a way to make beautiful things,” he says. “Teaching was a way to do that and sustain myself.”

As it turns out, he was a very good teacher and he enjoyed it, immensely. “One of the greatest treasures to come out of my entire life and career has been the long line of wonderful students who’ve come through my studio,” Saunders says. “We got to know each other and become part of each other’s lives. Hundreds of them keep in touch with me.”

As part of the "Return of the Wanderer" exhibition, McMaster Gallery will host an opening reception 5-7 p.m., Aug. 27, and a gallery talk with Saunders beginning at 6 p.m. McMaster Gallery is located in the University of South Carolina's of School of Visual Art and Design at 1615 Senate St. with parking on Pickens, Senate and Pendleton streets. The gallery is free and open to the public from 9 a.m. to 4:30 p.m. weekdays.