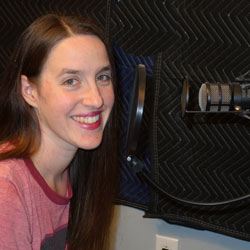 “I was lucky in that I had a dream and I was able to pursue it,” says Gabrielle Olexa of her fledgling career as an audio book narrator. "Of course, I still have a long ways to go."

In a perfect world, all of Gabrielle Olexa’s neighbors would own cats and drive whisper-quiet electric cars. And, for good measure, every jet, fire truck and motorcycle in Charlotte, N.C., would give her home a wide berth.

None of those things happens, of course, which is why Olexa’s budding career as an audio book narrator hits the pause button whenever the noise level spikes outside her home recording studio.

“Sometimes I have to go out and yell at the neighbors’ dogs and tell them to be quiet,” says Olexa, who earned a bachelor’s in English/secondary education from the University of South Carolina in 2004. “And don’t get me started on leaf blowers.”

Olexa credits an English course with planting the first seed of inspiration for becoming a book narrator. She was asked to read aloud a book passage in class one day and heard someone say that they could listen all day to her mellifluous voice. Fast forward several years and several thousand miles to when Olexa was teaching English in China.

“In Shanghai, it seemed like every school where I taught was an hour away. I got bored with no one to talk to on the train, so I started listening to audio books,” she said. “One day it hit me that I could do that — narrate books.”

Her husband, Phil, helped set up a makeshift recording booth in their apartment in China to begin practicing. When they settled in Charlotte, they set up a better recording studio in a spare bedroom.

“There’s a website that brings authors and readers together, and I found a woman who was a lot like me. She was a new author, not famous. I needed that to get my feet wet in book narration,” Olexa said.

After the first book, “The Enemy in the Mirror,” by Sandra Miller, she recorded “The Crystal Cavern” for the same author, then connected with Shaun McCoy, a fellow Carolina graduate who had published the short novel “Electric Blues” and was looking for a narrator.

Since then, the birth of a child has temporarily put the brakes on her recording career — “I can’t shut myself in a room for hours at a time right now” — but Olexa has managed to find a few quiet hours to write a few short stories. And she’s started recording the first book of a trilogy McCoy wrote. “Shaun has published a lot of books now. I could probably stay busy for five years just narrating his stuff,” she said.

With a few titles under her belt, Olexa has figured out many of the nuances of book narration such as developing a repertoire of male and female voices, calibrating the right level of emotion and tone and maintaining a consistent voice throughout each project.

“It’s all about acting and pretending to be someone you’re not,” she said. “I’m probably one of the worst perfectionists in the world, so I tend to take too much time trying to make it sound like I think it’s supposed to. I’ll sometimes do dozens of takes trying to hit the right level of anger or sadness.”

All of that attention to detail can only help her with bigger book narration projects in the future. She’s beginning to carve time around her toddler’s nap schedule and sometimes is able to find the sweet spot. The neighborhood dogs aren’t barking, jets aren’t roaring overhead and she hits just the right notes of joy and pathos.