Debut of the global mix-master 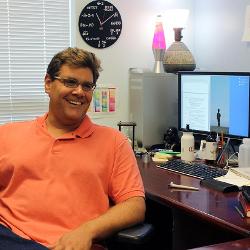 Howie Scher led a scientific team that has dated the onset of the Antarctic Circumpolar Current at 30 million years ago. The world’s largest ocean current, the “global mix-master” in the Southern Ocean transports nutrients, heat and salt around the world.

Trekking across the high Canadian Arctic almost 20 years ago, Howie Scher had an unexpected encounter that helped fix the course of his career.

An undergraduate on a research expedition over summer break, Scher was part of a scientific group traveling deep into the Arctic Circle to collect basalt cores for paleomagnetic analysis. But as focused as the team was on finding rocks with magnetic minerals that can help establish where on Earth they had  formed, it was stony deposits that had once been very much alive that really caught the team’s collective eye.

“We stumbled across a fossil bone bed there,” Scher says. “We were pulling out vertebrate fossils — crocodilians, turtles, bony fish — and when we got home we showed them to a paleontologist who told us it was a warm water assemblage. That was a great experience as a freshman in college, and it got me very interested in climate — just seeing how it had been so different in the past than what my experience was near the North Pole, trudging through the snow.”

Now an associate professor at the University of South Carolina, Scher has made a career of climate science. He is part of an international team that recently published a report pinpointing the genesis of one of the cornerstones of the Earth’s current climate system, the Antarctic Circumpolar Current.

A constant eastward flow of ocean water in the Southern Ocean encircling Antarctica, the Antarctic Circumpolar Current is akin to the Gulf Stream, the current that moves water through the Atlantic Ocean from the tip of Florida, along the east coast of North America, and, by extension into the North Atlantic Current, to the shores of western and northern Europe. The Gulf Stream’s transport of warm southern waters northward is why many European countries have more temperate climates than would be expected purely from their latitudes (relatively mild London, for example, lies more than 500 miles further north than Toronto).

But if the Atlantic Circumpolar Current is something like the Gulf Stream, there’s a notable difference: it’s even bigger.

“It’s the largest ocean current today, and it’s the only one that connects all the ocean basins,” Scher says. “The Atlantic, Pacific and the Indian are huge oceans, but they’re all bounded by continents; they have firm boundaries. The Southern Ocean, around Antarctica, is the only band of latitude where there’s an ocean that goes continuously around the globe. Because of that, the winds that blow over the Southern Ocean are unimpeded by continental barriers.

“So the distance that the wind can blow over the ocean, which as oceanographers we call the ‘fetch,’ is infinite. And fetch is one of the things that determines how high the waves are, how much mixing goes on in the oceans, and ultimately what drives surface ocean currents. With infinite fetch, you can have a very strong ocean current, and because this particular band of ocean connects all of the world’s oceans, it transports heat and salt and nutrients all around the world.”

In a paper recently published in the journal Nature, Scher and his team make the case for just when this massive ocean current first started flowing. One straightforward obstacle in the distant past was the arrangement of continental masses. Antarctica and Australia were part of a single super-continent, Gondwana, and began to separate about 83 million years ago, so the Pacific and Indian Oceans couldn’t have been in contact near the South Pole before then.

It was much later than the initial separation of Australia and Antarctica that deep ocean currents could flow between the two continents, though. Paleoceanographers have identified a transition, the opening of the Tasmanian gateway, a deep-water channel between Tasmania and Antarctica, as being a necessary part of any large-scale, sustained flow on the order of the Antarctic Circumpolar Current.

Using recent, geophysically derived information about the separation of Antarctica and Australia, Scher and his team developed a tectonic model that showed that the Tasmanian gateway first developed at least 500 meters of depth some time between 35 and 32 million years ago.

From geochemical analyses of sediment core, however, they concluded that the channel opening to that depth wasn’t enough to get the Antarctic Circumpolar Current flowing. The Pacific Ocean is in contact with much younger rock than the Indian Ocean, Scher says, which leads to a distinguishing concentration in each ocean of one isotope of neodymium that has a half-life longer than that of the solar system.

By measuring neodymium isotope compositions incorporated into fish teeth fossils in core samples, the team was able to establish that eastward current flow between the Pacific and Indian Oceans didn’t begin until about 30 million years ago, some 2 to 5 million years after the Tasmanian gateway opened.

Taking both geophysical and geochemical data into account, they conclude that although the Tasmanian gateway was wide enough to accommodate a deep current, the gateway was located too far south to be in contact with the mid-latitude trade winds, which are the driving force for today’s eastward-flowing Antarctic Circumpolar Current.

Instead, when the gateway first opened, water initially flowed westward, the opposite of that today, in keeping with the prevailing polar winds located at the more southern latitudes.

Only as both continents, and the gateway between the two, drifted northward on their tectonic plates over the next several million years did alignment with the trade winds come about. That reversed the current flow, to the east, and the Antarctic Circumpolar Current was born.

“It’s the global mix-master of the oceans — that’s a quote from Wally Broecker [of Columbia University’s Lamont-Doherty Earth Observatory], and that’s what it’s been called by oceanographers for 50 years now,” Scher says. “The Antarctic Circumpolar Current is the world’s largest current today, it influences heat exchange and carbon exchange, and we really didn’t know for how long it’s been operating, which I call a major gap in our command of Earth history. It was a cool outcome.”