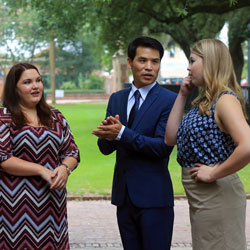 New College of HRSM Dean Haemoon Oh is meeting with students, faculty and other stakeholders in the college in the coming weeks.

Haemoon Oh, the newly appointed dean in the College of Hospitality, Retail and Sport Management, has hit the ground running — in every sense of the word — at Carolina.

Besides devoting his first weeks to back-to-back meetings with HRSM faculty and staff and university administrators, Oh has taken a few early morning jogs and gotten his first taste of Southern hospitality. “Everyone seems so friendly here,” he said. “Even a runner I crossed paths with early this morning took the time to say ‘Hi.’”

Oh is impressed with the level of passion he’s encountered in the college and energized by the possibility of even more enrollment growth (HRSM enrollment now stands at about 2,400).

“This college is rare — every department has exciting majors, and our growth potential is huge,” he said. “We’ve been limited by resources, and we need more space. We’re in an outdated facility now, but the president has promised that we’ll have space in the Close-Hipp Building in the near future.”

With the plan for a larger academic home for the college in place, Oh is also calculating the need for additional faculty and staff. But he is committed to continuing his listening campaign before launching any major initiatives.

“I don’t want to prematurely define my vision for the college. I’m planning to listen to faculty and learn where they want to go as a college so that I can align my vision accordingly,” he said. “Overall, no matter where they want to go, we have to be mindful of our quality and our reputation. It’s difficult to survive without a solid reputation.”

Oh sees a Top 5 ranking for each of the college’s departments as an aspirational but ultimately achievable goal. “That’s what I want to see happen, and that is where I want to invest heavily,” he said.

Before joining the College of HRSM, Oh was chair of the hospitality and tourism management department in the business school at the University of Massachusetts – Amherst since 2009. Prior to that appointment, he was a faculty member at Iowa State University for 12 years where he also directed graduate programs. He began his academic career at Penn State, where he earned his doctoral degree.

Oh and his wife, Miyoung Jeong, have been a dual academic career couple for 16 years. This fall, she will join HRSM’s School of Hospitality, Restaurant and Tourism Management faculty and will report to the university provost. The couple has two children, 15-year-old Kevin and 13-year-old Lauren, and Oh is eager for them to experience Southern culture.

“They’ve been in the Midwest and the Northeast, so this will be a big change for them in many ways but an opportunity to learn about another part of the country and its values and traditions,” he said.