The Savannah runs through it 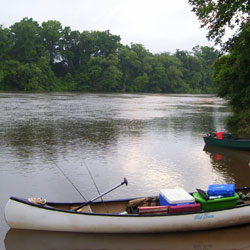 Rolling on a river

Eric Morris has logged hundreds of miles paddling his canoe on rivers in Georgia and South Carolina. A trip down the Savannah inspired "Jacob Jump," a novel published by USC Press as part of its Story River fiction series.

A cursory reading of the synopsis of “Jacob Jump,” Eric Morris’ just-published first novel, might prompt comparisons with James Dickey’s “Deliverance.” Both stories involve ill-fated boating trips on rivers, but the similarities end there.

In crafting his novel, Morris, a stage design instructor in USC’s dance program, drew from countless experiences of paddling Georgia and South Carolina rivers, including the Savannah, on which “Jacob Jump” is set.

“There’s nothing like a south Georgia river in the summertime — good days and good nights,” says Morris, who wrote the book in the basement of his home in Kentucky, where he was resident designer of Lexington (Ky.) Children’s Theatre for 12 years. “I’ve done the entire length of the Savannah in my canoe.”

Morris finished the novel in 1999, but despite interest from a literary agent, “Jacob Jump” remained unpublished. That changed when Morris’ wife, Christine Nicol-Morris, mentioned her husband’s story to Jonathan Haupt, director of USC Press, and novelist Pat Conroy, editor-at-large for USC Press’ Story River Books fiction imprint. Nicol-Morris is the special events coordinator for University Libraries and had an opportunity to speak to Conroy at a library gathering.

Conroy was smitten with the novel and recommended it to the Press for publishing. He later wrote a foreword for the book, which became launched earlier this month.

“Few things ignite the imagination of a writer more than a river,” Conroy said about Morris’ novel in a recent Facebook posting. “Eric is a novelist with singular gifts of compression and exactitude … He brings his hardscrabble characters fully to life as he guides us along a two-hundred-mile river journey with two men who have both reached desperate points in their lives and have taken to the unsympathetic waters for respite and redemption.”

Morris says a flooded river, where the action in “Jacob Jump” takes place, is “an obvious metaphor for how you often can’t fix where your life is headed. Sometimes you can, but not always. You think you’re in control, but everything can change in one day or in one hour.”

Morris has written two other novels, a couple of novellas and has a major dance project in mind. While he’s getting ready to start a promotional tour for “Jacob Jump,” Morris remains focused on one of his favorite topics — the creative mind.

"I look at these 18-, 19-year-olds and tell them, ‘You might not understand what I’m saying now, but you will in a few years. The creative mind comes from inside of us, not how smartly we talk about it.’ For the creative person, there is no substitution for sincerity.”