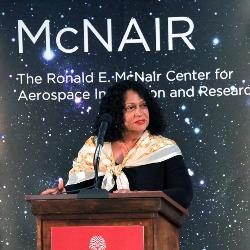 The McNair Center is the only university-based aerospace center to house a production-level automated fiber placement machine, allowing full-scale testing of new materials and designs for industry partners.

The University of South Carolina’s McNair Aerospace Center is teaming up with Boeing — the world’s largest aerospace company — to conduct advanced research projects that could deliver the next generation of aerospace technology.

The research agreement announced Thursday (Aug. 6) will provide funding for up to two dozen research projects that explore ways to improve Boeing products. Boeing’s investment could be up to $5 million over the length of the agreement. The agreement marks the first formal partnership between Boeing and USC, the state’s flagship research university and home to South Carolina’s only university-based aerospace research center.

“This partnership with Boeing puts the University of South Carolina on the forefront of research that will lead to exciting new discoveries in the aerospace field,” Pastides said. “This is only the beginning of a relationship that could have a transformative impact on the economy of the state and the region. Together with Boeing, the McNair Center will work not only to innovate, but also educate future aerospace engineers and makes South Carolina a choice destination for the aerospace industry.”

“Boeing is pleased to announce this agreement because we believe it will create benefits for our company, the University of South Carolina and the state of South Carolina,” Tracy said. “This partnership with the university will help ensure Boeing can incorporate innovative technologies that will make our products even more capable, our workplaces even more productive and our company even stronger. And as our company is strengthened, we become better able to deliver for our customers, our employees, our stakeholders and our communities, including South Carolina.”

Boeing is continuing to grow its presence in the Palmetto State. At its 743-acre main campus in North Charleston, Boeing South Carolina is home to the company's second 787 Dreamliner final assembly and delivery facility. The site also fabricates, assembles and installs systems for rear fuselage sections of the Boeing 787 Dreamliner. The company also recently opened a 100,000-square-foot research and technology facility in North Charleston that leads the company’s research and development efforts in areas of advanced manufacturing with a focus on composite fuselage and propulsion production.

Overall, South Carolina’s aerospace industry employs more than 53,000 workers and has a $17.4 billion economic impact on the state, according to a 2014 economic development study.

The McNair Center is the only university-based aerospace center in the country to house a production-level automated fiber placement machine, which allows the center to conduct full-scale testing of new materials and designs for industry partners. Nearly 30 USC faculty members from a variety of disciplines contribute to McNair Center research. Last year, McNair announced a multi-year research contract with Dutch-based Fokker Technologies.

The McNair Center also is central to USC’s aerospace degree offerings, which allow students to work side-by-side with top researchers and industry partners. The center also partners with organizations to support workforce alignment initiatives and programs and camps that help K-12 students throughout the state explore the STEM fields.

About the University of South Carolina

The University of South Carolina is a globally recognized, high-impact research university committed to a superior students experience and dedicated to innovation in learning, research and community engagement. Founded in 1801, the university offers more than 350 degree programs and is the state’s only top-tier Carnegie Foundation research institution. More than 46,000 students are enrolled at one of 14 locations throughout the state, including the research campus in Columbia. With 47 nationally ranked academic programs including top-ranked programs in international business, the nation’s best honors college and distinguished programs in engineering, law, medicine, public health and the arts, the university is helping to build healthier, more educated communities in South Carolina and around the world.

About the McNAIR Center for Aerospace Innovation and Research

The McNair Center for Aerospace Innovation and Research at the University of South Carolina is named in honor of South Carolina native and astronaut Ronald E. McNair. Formed in 2011, it is dedicated to bringing together top researchers and industry leaders to meet the technological demands of tomorrow’s aerospace market. McNair’s research is based on specific industry needs and involves a wide range of areas, including: analysis and design; polymeric, metallic and ceramic composites; lightweight metals; stir friction welding and processing; advanced composite structures and certification, durability, fatigue analysis; and health monitoring and condition based maintenance of lightweight structures.