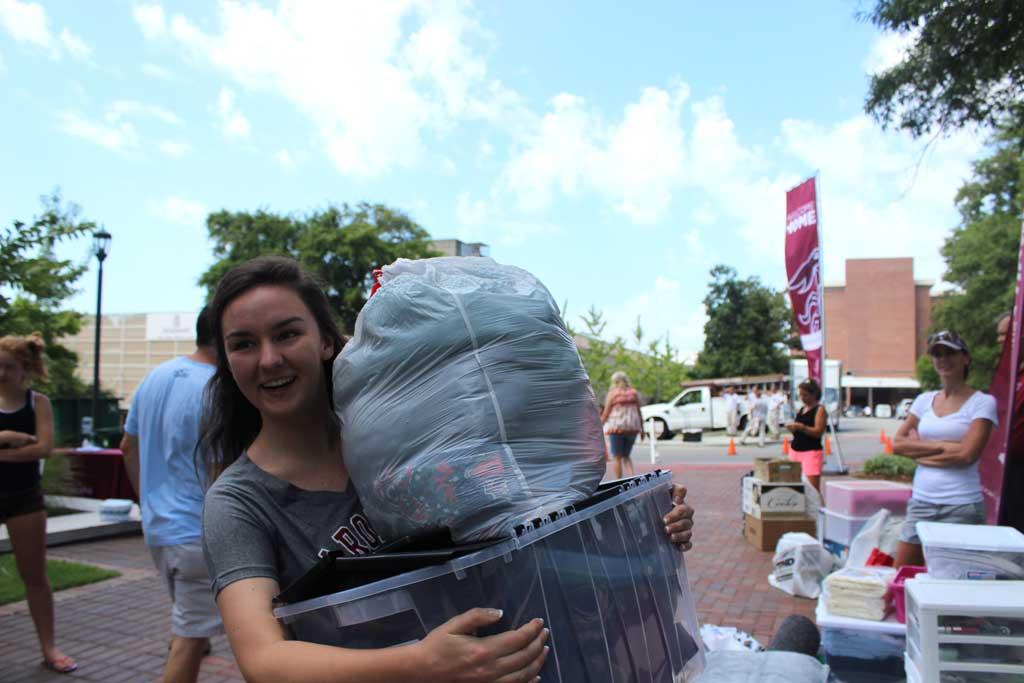 UofSC has welcomed its newest students every year with open arms from faculty and staff members to help with move-in. This year, upperclassmen are helping as well.

Boxes, baskets, suitcases, futons, televisions. This week, the University of South Carolina campus will be bombarded with new students as they move into their new homes.

For the first year, other students will be lending a helping hand to get the freshman class settled as a part of the Move-In Crew. In years past this duty has fallen solely to faculty and staff members, carrying armfuls of belongings up stairs or on elevators and through hallways.

Amanda McGuire, a sophomore business student, saw helping with move-in as the perfect end to her summer spent welcoming the new class at orientation.

“I thought move-in would be fun,” she says. “We’d get to see people we worked with and I think it’s exciting. It’s their first real step being on campus so I wanted to try to alleviate some of that stress because I know it can be chaotic.”

When McGuire moved into Capstone last fall, her family drove from Farfaix, Va., with two carloads of things. The Move-in Crew last year helped her settle in. They offered advice about where to grab lunch and navigate a new city.

“They were facilitating the rolling bins, which were super helpful,” she says. “We had no idea where we were going."

Since last year, she has become a moving expert, moving by herself and now lending a helping hand with the newest Gamecocks. She hopes that makes a difference for the parents dropping their kids off.

“I think that last step of ensuring parents that everything is going to be OK, hopefully I can do that,” she says. “I think the students are ready and anxious. I don’t think they need any more encouragement.”

Other student groups pitched in as well, including Carolina Pi Chis who helped with more than 1,600 young women moving in early for sorority recruitment.

McGuire thinks having students help with move-in can make a difference for freshmen.

“You get that essence of Southern hospitality when you come here for the first time when everyone is here, reaching out an arm to help you carry your carpet or help you carry your boxes,” she says. “I think that’s why a lot of people come to Carolina.”