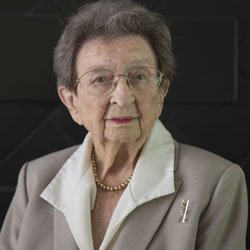 A 1943 graduate of the University of South Carolina School of Law, Sarah Leverette was the only woman in her class. Later, she became the law school's first female faculty member.

Women comprise about half of each incoming class in USC’s School of Law, but Sarah Leverette hails from an era when female law students could have been considered an endangered species.

“I always said I knew the door was closed for women, but I didn’t know  it was locked,” says Leverette, 95, a native of Iva, S.C.

Fortunately, career paths in education and government opened. Not long after graduating, she became the law school’s first female faculty member, serving as librarian and legal writing and research instructor for 25 years. She went on to be commissioner and chair of the S.C. Industrial Commission (now Workers’ Compensation Commission) and continues to serve the League of Women Voters and S.C. Women Lawyers Association.

One of Leverette’s law school colleagues was Beverly Lovejoy Boyer, an assistant law librarian dedicated to children’s issues and how the law could  help them.

“Beverly spoke for those who could not speak for themselves — the children,” Leverette says. “She was a most compassionate person and a  vital assistant to me.”

Boyer has passed away, but, thanks to a memorial gift from Leverette,  her name will adorn a conference room in the future Children’s Law Center  on the corner of Gervais and Pickens. Leverette has also established the Stephen Ernest Leverette and Allie McGee Leverette Memorial Scholarship  at the School of Law in memory of her parents.

“They were forward thinking and very supportive of my going to law school,” she says. “They believed in education as a prerequisite for a full life and gave each of us a college education.”