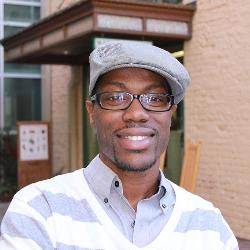 Sherard Duvall, '01, is a Columbia-based hip-hop advocate. He will take part in an interactive discussion on homegrown music this Saturday as part of Folkfabulous 2015 on the historic Horseshoe. Duvall will join other traditional music supporters in a discuss of the importance and vitality of this music in our state.

Turning a bad situation into something good is how Sherard “Shekeese” Duvall, ‘01, operates. The Columbia-based television/film producer, arts advocate and entrepreneur knows how to turn a negative into a positive. “I’ve always been an upbeat person, ready to create something new or to change something that isn’t working,” he says.

Take one of Columbia’s newest events as an example. The Hip-Hop Family Day was launched when another music event couldn’t showcase rap artists.

“In 2011, we were told that a local business didn’t cater to ‘urban clientele’ and would not sponsor rap performers,” Duvall explains. His partner Darius Johnson, aka FatRat Da Czar, fellow University of South Carolina grad Kingsley Waring and Duvall decided to do it themselves, not just with one concert but with an entire day of events.

The family-oriented festival kicked off three years ago and is now one of city’s top events, attracting local, regional and national rappers, food trucks and arts and craft activities. “We’ve averaged about 5,000 visitors each year,” Duvall says. “It has the feel of a neighborhood block party. The parents like it because we’re kid-friendly and we present music the parents recognize.” Last spring, festival organizers brought rap artists Nice & Smooth, Monie Love and Big Gipp of the Goodie Mob to Main Street.

Duvall grew up in Columbia with short stints in Atlanta and New York. Since the mid-80s, he has had an ear for the lyrics, sampling, beat boxing and turntable artistry of rap. “Run DMC’s ‘Rock Box’ with Jam Master J and LL Cool J’s ‘Go Cut Creator Go’ hooked me,” he says.

In high school, Duvall turned his passion for rap and his creativity into a DJ business. He started small, spinning records at house parties and school dances. As his mixing reputation grew, requests to perform came from all over the city. One gig was even in a strip club, he remembers. “I don’t know if they knew I was under age. It didn’t pay much, just a $150 plus tips. For a high school student, it was good money.”

His plans to attend Boston’s Berklee College of Music to study audio engineering were dashed. It was too expensive. So Duvall made the best of what was closer and less costly. He entered Carolina and studied media arts in the newly renovated McMaster College. There he learned the ins and outs of film/video production and made solid contacts. “I was able to experiment and bend the rules some,” he says. “It was good.”

And at the same time he continued being a DJ, and he hosted hip-hop shows on WUSC, the campus radio station.

After graduation, he worked at Mad Monkey and Genesis Studios, two Columbia production studios. He worked on national accounts for MTV, VH1 and NutriSystem as well as local projects for Colonial Life and Mungo Homes. “I worked mostly on reality TV shows or major commercials,” he says. “I worked on ‘Mystery Diagnosis’ for the Discovery Health channel, a fishing show for ESPN and ‘Makings of Me’ with rapper 50 Cent for VH1.”

Though his days were full, Duvall didn’t give up the music. “It will always be my first love,” he says.

On the side, he and college partner Waring established NonStop Hip-Hop Live, a radio program that also hosts concerts and educational outreach events throughout South Carolina. The organization has showcased KRS-One, Kool G Rap and Masta Ace. It also presents lectures, workshops and classes on hip-hop culture, especially the music’s local development.

Duvall’s intimate knowledge of the local scene inspired Douglas Peach, the folk-life and traditional program coordinator at the McKissick Museum, to ask him to participate in FOLKfabulous 2015 this Saturday (Aug. 22). “Sherard’s years of dedication to the hip-hop community in Columbia as a DJ, producer and advocate is why we wanted him to speak about this musical community.”

Duvall will take part in an interactive discussion on hip-hop in South Carolina, says Peach. “He will join advocates from the traditional gospel, Gullah Geechee, old-time music and bluegrass communities of the state, explaining the importance and vitality of this music in our state.”

And for Duvall, FOLKfabulous is another chance to show the positive side of hip-hop with the community. “It is an honor for hip-hop to be recognized among the treasures of Southern music,” he says. “I’m honored to speak on its behalf.”

For a full run down of FOLKfabulous events, visit the McKissick website.