UofSC named one of the best US colleges 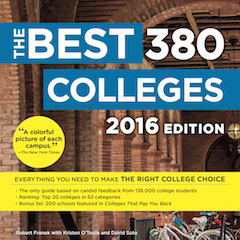 UofSC is one of “The Best 380 Colleges” in the U.S., according to the Princeton Review.

The book, "The Princeton Review’s Best 380 Colleges: 2016 Edition," has a full profile of the university, highlighting different aspects of the school including academics and life.

The book includes more than 60 “Top 20” lists that were based on surveys by students at each school featured. UofSC ranked on several of those lists, including No. 16 for “Students Pack the Stadiums."

In the fall of 2013, 75 percent of the population of 26,304 students came to at least one Gamecock sports event, according to Athletics.

One way that the university keeps students coming out to athletic events is by making sure the tickets are free. Students also are given more incentive to come because of the Loyalty Point and Student Rewards Program.

The university ranked 17th on the “Best Athletic Facilities” list.

UofSC has 15 facilities that cater to Gamecocks in one way or another. The Dodie Anderson Academic Enrichment Center serves as a place for athletes to come together and excel academically, while Gamecock Park is the premiere place for football tailgating.

Recently, the university has added another facility to its list, the Football Indoor Practice Facility. Renovations also are being planned for other facilities around the university, including the Spring Books Plaza at Williams-Brice Stadium, the Carolina Tennis Center and locker room upgrades.

For the “Best College Newspaper,” UofSC ranked No. 18.

The Daily Gamecock, the university's independent student newspaper, is one of four Student Media outlets at UofSC. The paper has been published since 1908.

For the 2013-14 academic year, the South Carolina Press Association recognized the Gamecock as the “Collegiate Paper of the Year.” The paper also won first place for its website and Facebook page.

The award-winning newspaper is always looking for more student involvement. Student can get involved with writing and other aspects of the paper each semester.

The university also ranked No. 19 for “Best Alumni Network.”

This year, My Carolina Alumni Association will open its new home, the Alumni Center. The new center will feature thousands of square feet of meeting, conference and ballroom space. The center will host an event for students Aug. 18 as a part of the Carolina Welcome week. It is located at Senate and Lincoln streets in the Vista.

The book also features lists that grouped the colleges into categories. UofSC made it onto some of the lists, including,  “The Best 380 Colleges,” “Best Southeastern,” “Colleges That You Pay Back,” “Green Colleges” and “Public Schools.”