Funny on the fly 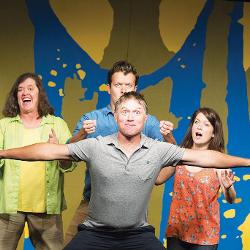 Funny on the fly

The Theatre 99 improv group was founded by UofSC theater grads.

A fit 40-something with a close crop of blond hair and a buoyant energy that seems almost to vibrate under the stage light’s glow, the emcee inspires as much confidence as he projects, and the audience is right there with him, offering up their phones to five actors as they come down into the crowd.

“Here’s the setup,” he says once the actors have resumed their places on stage. “The location is a gravel company that’s just experienced an earthquake.”

On cue, the actors begin to gyrate. Their bodies buckle and they gasp for air — even as they glance at the borrowed phones. The theater’s ’60’s-era chairs jerk back and forth, too, as the audience doubles over from what they’re seeing. Looking down at the iPhone in his hand, one actor reads, “I should have left this job months ago,” and the laughter peaks.

For 20 years, Theatre 99 has been the epicenter of improvisational theatre in Charleston, attracting a cross-section of the city — college students, hipsters, out-of-towners, theater regulars as well as curious thrill seekers looking for something “edgy” to do on date night.

And on a good night — like the night of the gravel company earthquake, when Tavares was serving as emcee — the laughter is contagious. “Nights like this are great,” says cast member Andy Livengood. “There really isn’t anything like a bunch of adults playing  pretend together.”

As co-artistic directors at Theatre 99, Tavares and Sullivan do more than just goof around on stage. They train and mentor local talent, present national acts and sponsor competitions and festivals of all sizes. The company, which boasts a cast of more than 50 players, has hosted the Charles­ton Comedy Festival since 2004 and since the mid-1990s has added plenty of punch lines to Piccolo Spoleto.

In other words, they’ve come a long way since they met as theater students in UofSC’s Longstreet Theatre back in the late 1980s.

“Brandy was the last person to audition for a play I was directing,” says Tavares. “I knew immediately she would be great for the role.”

After graduation, Sullivan moved to Charleston and Tavares relocated to the Midwest to pursue a master’s degree in acting and directing, but the two stayed in touch.

“This was the pre-Internet era,” says Sullivan, and Tavares chimes in: “We talked all the time, the old-fashioned way. Home phones and snail mail. Brandy was one of the few people I remained close to while in Nebraska.”

Perhaps that’s why they routinely finish one another’s sentences. They have spot-on timing, onstage and off, and seem almost instinctively to know what line is coming next.

Back in 1994, however, Tavares and Sullivan had no idea what the future would hold. He was trying to make a go of his acting career, bouncing back and forth between the Midwest, the West Coast and Charleston, and she was working at the Charleston Area Conventions and Visitors Bureau.

But then, along with a third partner, Bryan Mahanes, they produced a sketch for the Piccolo Spoleto Festival, the locally geared companion arts festival to Spoleto Festival USA. The following year, after Tavares moved to Charleston full time, they teamed up with a couple of other local actors to form The Have Nots! Improv Theatre Company.

“We had no place to perform. We had no money. And we had no audience,” says Tavares. “We were have nots.” Also, because most people had no clue about improv theatre, they spent lots of time explaining the art form. “We were constantly telling bar owners that we weren’t stand-up comedians.”

Sullivan recalls the scene clearly. “We had to convince them to turn off the poker machines and music, to put chairs on the dance floor and to adjust the lights,” she says. “We were scrappy in those days. We performed in any place that would have us — be it bars, private parties or what have you.” But even their name could prove problematic. “We were often introduced as The Haven Nots! Improve Comedy Company.”

By the mid-1990s things had started to change. The company was now a trio with the addition of actor Timmy Finch, who remains part of the theater’s core to this day. Meanwhile, with improv starting to catch on around the country, The Have Nots! caught the eye of East Coast Productions, a booking agency that specialized in placing acts on college campuses. That was the beginning of life on the road.

In six years, they hit 225 colleges in 26 states and even performed at UofSC’s Russell House a few times. In one stretch, they did 72 shows in 67 days. “There was little competition, our fees were really low, so the work was steady,” Tavares remembers. “That spring just about killed us, but we saved a lot of money.”

Eventually, though, settling down became a priority. “It was obvious we were getting older and college students weren’t,” says Sullivan. “We were married by then (not to each other) and Charleston was home for us.”

Using their savings, Sullivan, Tavares and Finch secured a spot on Cumberland Street, a space just large enough for 99 seats — Theatre 99. They signed a lease, bought some lumber and with the help of family and friends built a stage and risers.

Before long, their little theater company was actually a business, confronting many of the same challenges as most startups. Costs, revenue, marketing, product lines, personnel and contracts were daily considerations, but they worked hard to remain supportive, affirmative and collaborative. They also relied on a basic improv technique called “Yes, and …” that requires close listening skills and an appreciation of your partner’s contribution to a scene.

“It works best when you have good partners,” Sullivan says as she looks to Tavares. “Having a foundation based on positivity helps when negotiating tough decisions.”

It’s also how they manage other actors.

“Greg and Brandy work very hard to make the cast look good,” says Ali Sylvester, a mother and massage therapist who has been doing improv for about four years. “That’s a huge thing in improv. The result is a fun, playful and supportive environment for the performers.”

Without the aid of sound effects, props or costumes, the cast members of Theatre 99 take risks and push boundaries, relying only on their theater training. But even as the art form has grown in popularity, most newcomers are unaware that improv is totally unscripted.

“The ‘cool factor’ is what attracts a lot of first timers to the theater,” says Tavares as Sullivan nods her head. “For many, this is their first exposure to live theatre of any kind,” she says, “and they think we’re sketch comedy or stand-up comedians.”

But the duo is steadfast in maintaining their artistic roots, crediting former UofSC theater professor Ann Dreher, who, according to Tavares, never used the word “comedy” in class. “I don’t know what it means to be a comic,” he says. “We use our theater skills to create believable worlds on the spot, and most of the time, audiences find this funny. Sometimes they don’t.”

Regardless of the occasional botched scene, they have continued to pack the house even after Charleston’s “go-go” real estate market forced them out of their original Cumberland Street location and into their current spot at 280 Meeting St. It’s a little hard to find — the front doors are at the end of an alley at the back of a bicycle shop and up a flight of stairs — but it boasts nearly 40 more seats.

“It’s hilarious to watch people come down the alley and up the stairs for the first time,” Sullivan says. “They have no idea what they’re walking into.”

And what about Sullivan and Tavares? Does the duo know where they’re headed at this point? Are they satisfied with where they are and how they got there? Or are they still just making it up as they go along?

Back at Theatre 99, the energy level is at its highest point of the night. Tavares is still onstage, still under the lights, still bridging the gap between actor and audience.

“Name some accents,” he says to the crowd.

“Late today, the bus is,” says one of the actors, summoning the wizened voice of the famous "Star Wars" character.

The laughter swells, but Tavares, whose goal is always to take it the next level, is already on to the next opportunity, the next line, the next actor: “New Jersey!”

“Yeah, so whatcha gonna do about it?” the actor says, playing to the crowd. “Jusfahgetaboutit!”