Tops in the nation, again 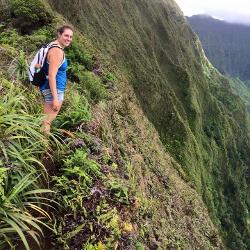 Carolina’s 2014-16 Hollings scholars completed their internships all over the country this summer, from Virginia’s Tidewater to Hawaii’s Pearl Harbor.

Watching their teams climb in the rankings is a cherished pastime of many Gamecocks, but competitive talent at the University of South Carolina is hardly restricted to the sporting life. Over the past several years, Carolina has been a fixture near or atop the leaderboard in producing Hollings scholars, fielding a group of academic talent that, once again this year, is second to none in the country.

Although the scholarship program is named after a former South Carolina governor and U.S. senator, Ernest “Fritz” Hollings, undergraduates in the state get no preferential treatment in the national competition. The rewards for success are ample, including up to $19,000 in scholarship money, a $7,000 summer internship stipend and travel money to present research results at national conferences.

“I think it’s a hidden gem,” says 2014-16 scholar Riley Brady. “You might hear more about the bigger name scholarships, but the Hollings package is incredible.”

Administered by the National Oceanic and Atmospheric Administration, the Hollings program annually identifies the most promising students in the nation interested in either ocean or atmospheric sciences. Carolina’s highly regarded marine science program is well represented in the annual haul of Hollings awardees, but other majors, often involving environmental sciences, are part of the mix as well.

The Hollings program is somewhat unusual among nationwide scholarship competitions in that the process — from applying to participating to entering its ranks of alumni — takes place entirely within a student’s undergraduate years.

Applications must be turned in before the end of the fall semester of a student’s sophomore year, and scholars are selected the following spring. Having a deadline come so soon in a four-year undergraduate career might thwart many a potential applicant, but not at Carolina.

“The marine science program and our Office of Fellowships and Scholar Programs do an amazing job of getting the word out,” says 2014-16 scholar Charlotte Eckmann. “A lot of Hollings scholars from other universities that I talked to had to find it on their own.”

The fellowships office also provides guidance and resources to students interested in applying.

“Having the fellowships office at USC that can walk you through it, at that young age in your academic career, is very, very helpful,” Brady says.

An orientation week for all Hollings scholars in Washington, D.C., the summer before their junior year helps them in the process of selecting a 10-week internship, at one of many NOAA installations nationwide, for the following summer. For many Hollings scholars, it gives them a fresh perspective on a career in science.

“I was able to see a different side of science this summer, working for NOAA,” says 2014-16 scholar Kelly McCabe. “At school, you really only see the academic side, but they do cutting-edge research on the government side as well and it’s nice to get a new point of view. It opens a lot of doors.”

Earning a hefty stipend in both their junior and senior years might be the major draw attracting applicants, but the process of finding and then working with a NOAA mentor was, according to several scholars, the greatest reward. Not only did they get a serious research project under their belt, as well as the experience of presenting their results to their peers and NOAA staff at a session in D.C. after the internships ended, but also they were able to strengthen their personal and professional networks as they approached their final year as an undergraduate at Carolina.

“That’s probably the biggest takeaway for me this summer,” says 2014-16 scholar Chandler Green. “I’ve had all these people to look up to, and now people to reach out to whenever I do start a career.”

Seeing Carolina at the top of a national ranking is always gratifying to Gamecocks everywhere, and those who have successfully navigated the application process here know  the year-after-year success is a testament to the support structure the university has in place.

“It really is remarkable how well we’ve done at USC, and I truly think that that’s a reflection of the scholarship office and also the support of faculty,” Green says. “Everyone knows about the Hollings and they’re extremely encouraging to students. They want us all to succeed.”