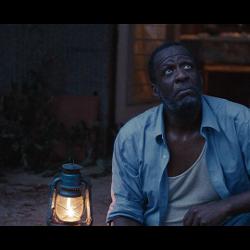 Stan Brown, a voice and diction professor, gives an outstanding performance in his latest short film project, "The Bespoke Tailoring of Mister Bellamy." Ironically, Brown's only line of dialogue comes in the final seconds of the movie.

The short film “The Bespoke Tailoring of Mr. Bellamy” featuring University of South Carolina theater professor Stan Brown is the winner of the 2015 Louisiana Film Prize, a prize that comes with a $50,000 cash award.

In addition to the cash award, the film received a distribution deal on iTunes through the Shorts HD channel and screenings at other festivals. Brown, a veteran stage, television and film actor, was awarded the Best Actor Award at the festival and received a $1,000 cash prize.

University of South Carolina theater professor Stan Brown chuckles when he thinks about his latest project. The humor is that Brown — a voice and diction coach — has just one line of dialogue in his latest role. “It’s the last line of the movie. It’s ironic when you think about it,” he says with perfect elocution.

A veteran stage, television and film actor, Brown is featured in “The Bespoke Tailoring of Mister Bellamy,” a short film set in the 1960s South. Written by Paul Pettersen, the film is the story of a homeless black man who learns to sew on an abandoned sewing machine. When he discovers a job opening for a janitor at a local law firm, he pours his heart and soul into designing and making a one-of-a-kind suit to wear to the interview.

Film director Alexander Jeffery knew this was a story he wanted to tell. “I fell in love with the character and the idea, and I absolutely had to make the film happen, one way or another.”

Brown was also intrigued, especially by the main character, who is silent until the final seconds. Challenged by the role, he spent months perfecting his mannerisms, choreographing facial expressions and body movements that convey feelings and emotions to viewers without the use of words. This is opposite to Brown’s training.

Classically trained, he was a student of the legendary voice and diction expert, Cicely Berry. And he has spent most of his teaching career coaching students and actors to perform using their “authentic voice” while on stage and on cue.

A graduate of Carolina, Brown found his true voice right here, majoring in theater and performing as a member of Carolina Alive in the mid-1980s. “Carolina Alive was the right thing at the right time for me,” he says. “I discovered my talents in the group, and it was an opportunity that prepared me for life in front of an audience.”

After earning a Bachelor of Arts and Master of Fine Arts in acting, Brown received additional training at the Folger Shakespeare Theatre in Washington D.C., the University of Warwick and the Royal Shakespeare Company in England. Before returning to his alma mater in 2014, he taught at the Johnny Carson School of Theatre and Film at University of Nebraska, where he met Jeffrey, a budding film and theater student at the time.

Brown’s stage credits include productions through out the U.S. and the U.K. His television work includes NBC’s “Homicide: Life on the Street,” and he had recurring roles in “In the Heat of the Night” and the critically acclaimed “I’ll Fly Away.” He co-starred in Robby Benson’s “Modern Love” and appeared in the cult film “Getting IN.”

As time passes in “The Bespoke Tailoring of Mister Bellamy,” people in the small town begin to notice changes in Bellamy. His clothes and his demeanor improve. But it’s easy to predict what will happen. “It’s apparent because of the time and location of the story. He’s denied the job, not even considered, really,” says Brown.

On the surface, the film seems like a melancholy tale, but Bellamy is a curious and optimistic person. “Stan brings this sense of wonder to the character; every second is nuanced and full of hope,” says Jeffery.

And, Brown adds with a smile, “Bellamy does have the very last line.”