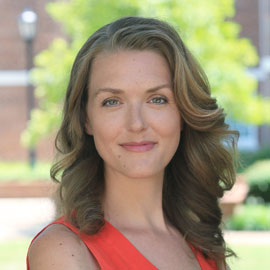 “There’s an important connection between being good, being happy and finding meaning in one’s existence,” says University of South Carolina philosophy professor Jennifer Frey, who has a research grant from the Templeton Foundation to the connections between virtue, happiness and the meaning of life.

In academia, landing a $2.1 million grant is pretty exciting. But will it make you truly happy?

University of South Carolina assistant professor of philosophy Jennifer Frey and co-PI Candace Vogler of the University of Chicago landed just such a princely sum this semester, and they’re hardly bummed about it. Their pursuit of happiness, however, is really just beginning.

In fact, that’s what the two-year, seven-figure grant is all about. Awarded by the John Templeton Foundation, it is being used to study the connections between virtue, happiness and the meaning of human life.

“Templeton likes the big questions,” says Frey, who hopes the grant will open up a wide range of interdisciplinary inquiry.

The team, which also includes Carolina assistant professor of religion Mari Stuart, is organizing six public lectures and a series of working meetings at Carolina and in Chicago, and will bring together 30 scholars from three distinct disciplines: psychology, religious studies and philosophy.

“There’s an important connection between being good, being happy and finding meaning in one’s existence,” she says.  “What the psychologists are finding in their empirical studies is that the less that people focus on themselves and their own needs, the happier they are.”

“So part of our research is getting psychologists and philosophers talking about how to run empirical studies, how to frame the questions, how to develop the conceptual grounding and interpret the data.”

But while measuring the correlation between virtue and happiness may be a relatively new frontier for psychologists, to philosophers it’s old hat.

“The deep connection between living virtuously and living well is something that Plato and Aristotle understood,” says Frey. “The criticism has been, ‘Well, you know, that’s all armchair stuff,’ but a lot of psychological research is showing that human beings really are fulfilled when they are working towards something that transcends themselves.”

That human desire for transcendence appears to be universal, says Frey.

“One thing that’s really fascinating to me about this grant is that we have a lot of people coming from different faith and intellectual backgrounds, but they’re all saying kind of the same thing, which is that human beings want to work for something the value of which can’t be explained just in terms of self-interest or personal welfare.”

And it’s not an all-or-nothing proposition. As Frey explains, there are degrees of transcendence.

“I think the highest degree would be some concept of the divine, something greater than us in the highest sense,” she says. “But there are these other degrees of transcendence. We disagree about the God question and whether or not life should be religiously oriented, but even secular people still have this need for a kind of transcendence and they have interesting other ways of trying to get it.”

After all, as Frey suggests, we are on a constant quest to understand our place and purpose in the universe, and that pursuit is at the heart of the philosophical endeavor.