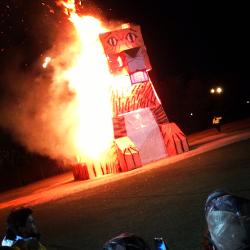 Engineering students will watch their work go up in flames on Monday at the annual Tiger Burn pep rally.

No professor wants to see the work of his students go up in flames. That is, unless you are mechanical engineering professor Abdel Bayoumi. For Bayoumi, it’s all about the burn.

Monday marks the 12th year that Bayoumi and his students will watch their design and construction of a gigantic Clemson tiger burn in effigy on the intramural field adjacent from the Colonial Life Arena.

Gamecock fans are invited to join Bayoumi and the campus community at Tiger Burn, which will get underway at 6 p.m.

Bayoumi says, it’s not hard watching the work go up in flames.

“It’s actually my favorite part. That might sound weird because when you normally design and build something you want it to be around for a while, but this project is different because you know right from the beginning that it is being designed to burn. So, when you see everything go up in flames, it’s a very satisfying feeling,” Bayoumi says.

It was 2003 when Bayoumi and his students in the American Society of Mechanical Engineers were asked to help build a bigger, better tiger for the Carolina community to burn during Carolina-Clemson rivalry week. Previous tigers were built in a down position.

That first fall, team Bayoumi’s tiger topped 15 feet. By 2005 it stood 25 feet and featured a mechanized lower jaw that would open and close.

At Monday’s Tiger Burn, the tiger will stand more than 30 feet. Bayoumi says fans can expect some surprise theatrics at this year’s event.

The most challenging part of the tiger project isn’t the design but the assembling of it.

“It’s a very nerve-wracking experience because we have a crane come in and hold the pieces in place while we assemble them. All the while, we’re working under pressure of the clock because everyone is expecting the event to occur on time,” he says.

Colby Murphy, a senior mechanical engineering major from Columbia, says the process takes a few weeks to complete. This year’s tiger was constructed with a wood frame covered in chicken wire, paper and then painted. Murphy says working around that much orange is worth it.

“It’s never hard to watch a tiger burn, especially since it's Clemson’s mascot. It’s great to see the crowd go wild when it goes up in flames. This upcoming Tiger Burn will be my fourth year helping to build and design the tiger and construct it the day of burn," Murphy says.

He, along fellow engineering students Chris Small, Mac Taylor and Cody Wilkins worked nights and weekends on the tiger. They will lead a larger team of students to put the tiger together on Monday.

According to university archivist Elizabeth West, the legend of Tiger Burn goes something like this:

“In 1902, Carolina scored an upset victory over Clemson. Students paraded around with a drawing of a Gamecock crowing over a beaten tiger. Clemson students marched on the campus to seize the drawing, but faculty and police intervened before blood was spilled. The drawing was burned between the two student bodies as a compromise,” West says. “The Carolina-Clemson riot gave us the origins of Tigerburn, and cemented the Gamecock as our mascot.”

West says newspaper accounts have 1920 as the first mention of a tiger being burned.

“Students would burn it after the game, if they won and on the steps of the Statehouse,” she says. “They may have prepared tigers in earliers years but not burned them, or it just didn’t make it into local newspapers.”

West says it was sometime in the mid-1920s that students began burning the tiger prior to the game.

The location and day of week for Tiger Burn has changed over the years. It hasn’t been held on the Horseshoe since 1996. Other locations have include in front of the Russell House University Union, at the S.C. State Fairgrounds, Davis Field and on the Blatt P.E. field. Since 2006, it has been held on the intramural fields by the Colonial Life Arena. The campus tradition has taken place on Monday since 2008 when the rivalry game began taking place on the Saturday after Thanksgiving.