Life as we now know it was 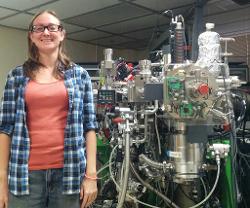 A 2008 graduate of the South Carolina Honors College at UofSC, Beth Ann Bell earned her doctoral degree in Mark Harrison's lab at UCLA, where she is first author on a recent paper that uncovered signs of life on Earth that predate all earlier evidence by 300 million years.

Beth Ann Bell really knows how to turn back time. The University of South Carolina alumna, now a post-doc in Mark Harrison's lab at UCLA, may have rolled the starting point for life back by 300 million years.

Bell is the first author of a paper in the Proceedings of the National Academy of Sciences that made a splash in October, providing evidence for terrestrial life that dates to about 4.1 billion years ago.

That beats the age of the earliest “chemofossils” described in the scientific literature, which were a little more than 3.8 billion years old. Bell, who has been looking deep into Earth’s history since starting research as a sophomore at Carolina, says the results reinforce the idea taking hold among scientists that the very early terrestrial world was not as hellish as once thought.

“Our planet is a little over 4.5 billion years old, but the oldest rocks still preserved on the Earth today only go back about 4 billion years,” Bell says. “So we have this half billion years of history, where there was a lot of really important stuff going on.

“And in the absence of physical evidence with rocks, we came up with this idea that the early Earth was boiling hot, had no liquid water, and was constantly disrupted by, say, meteorite bombardments — in other words, there was no life and no possibility of life because of the really harsh conditions.”

That’s why the period of time before 4 billion years ago was dubbed the Hadean era, after the Greek god of the underworld, Hades.

But while it may be too soon to reclassify Earth as an Eden back then, Bell and her colleagues found good evidence for a garden, at least.

The oldest fossilized remains anyone has uncovered date back only about 3.5 billion years, Bell says, so the research team was using an indirect approach in looking for even earlier life. They pored over dozens of tiny grains of zircon, a tough mineral of zirconium silicate, that had been collected from the Jack Hills in western Australia and were all at least 3.8 billion years old. The scientists used a couple of spectral techniques on the grains, first looking for inclusions within a zircon that had to be as old as the zircon itself, and then looking at the chemical content in each inclusion, hoping to find carbon.

Carbon is one of the building blocks of life, but in and of itself it doesn’t constitute a signature of life. The isotopic mixture of a sample of carbon, though, can reflect whether its atoms were once part of a living creature. That’s because some biological processes incorporate the carbon-12 isotope more readily that the carbon-13 isotope, both of which are natural and radioactively stable. Consequently, a high carbon-12/carbon-13 ratio is a characteristic of a carbon sample that has been part of the biosphere.

And that’s just what they found in one of the zircon inclusions they looked at — a graphite carbon sample with a high carbon-12/carbon-13 ratio that matches what one would expect from biogenic carbon. Although it wasn’t a fossil per se, it was the “chemofossil” they hoped to find at the outset.

It was crucial to find the sample encased in zircon, because a different isotopic analysis — namely, of uranium and lead — is what made dating back so far possible. Two isotopes of uranium have decay chains leading to lead with half-lives on the order of billions of years, so the zircon in question was able to be precisely dated to 4.1 billion years in age.

The zircon, which through encapsulation protected the biogenic carbon atoms from mixing with their nonliving brethren (so to speak), thus transported a sliver of graphite through 4.1 billion years of Earth’s history with its carbon isotope ratio intact. Not bad for a mineral that is a chemical cousin of the oft-scorned cubic zirconia, which is a particular form of oxide of the element zirconium.

For Bell, the discovery and high-profile paper are further steps toward the goal she has had since she arrived as a McNair Scholar in Columbia, which is to land a faculty position where she can continue her geochemical research into early Earth. She says her experience at Carolina, and particularly the opportunity to do high-level research in associate professor David Barbeau’s Tectonics and Sedimentation Laboratory as an undergraduate, gave her the tools she needed for success in the academic world.

“Being a geology major at Carolina definitely prepared me for grad school,” Bell says. “It’s kind of a small undergrad program, so we had the small class sizes there and in the South Carolina Honors College as well, and there was a lot of room for working in research labs. And all of the professors were really great—it was just a great experience.”

Bell arrived at UofSC as a McNair Scholar, was named a Goldwater Scholar in 2007, and was the winner of a 2010 NSF Graduate Research Fellowship. As a McNair Scholar and in the application process for both nationwide competitions, she worked closely with Carolina’s Office of Fellowships and Scholar Programs.

The research article in the Proceeding of the National Academy of Sciences is available online.