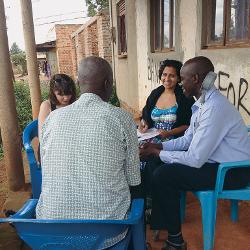 Aparna Polavarapu, a law professor and scholar with the University of South Carolina’s Rule of Law Collaborative, researches progress in African laws that affect women.

Hailed as a huge victory for women’s rights, the Supreme Court of Uganda made international headlines in August when it ruled the custom of refunding “bride price” unconstitutional.

Prevalent in many African countries, bride price is a tradition in which the groom’s family gives the bride’s family money or livestock in exchange for her hand. Prior to this decision, a divorce would only be granted if the bride price was returned.

Critics contend that, over time, this tradition had transformed from a custom into a business, often leading to child marriages, reducing women to property, and locking them into unhappy and even abusive relationships.

Now, women will no longer be forced to refund bride price, allowing them more freedom to get a divorce. In theory, anyway.

Aparna Polavarapu, a law professor and scholar with the University of South Carolina’s Rule of Law Collaborative, says changing that practice will be difficult. In a recent interview with the International Business Times, Polavarapu said, “[Bride price] is still a tradition that carries a lot of weight. I think [actual enforcement of this decision] will depend place-to-place because there’s a real symbolic value to bride price and some people will hold onto it.”

Just weeks before the ruling was announced, Polavarapu had returned from Uganda, where she continued her research into women’s rights. On previous trips to Uganda, Kenya, Rwanda and Tanzania, she concentrated on laws and practices related to marriage, inheritance and land rights. Because these issues are so tied to community and cultural norms, she often finds herself delving into the intricacies of customary law and how it interacts with statutory law.

In her most recent visit, Polavarapu added another layer onto her scholarship, turning her attention to the courts.

“Researchers and policymakers focus heavily on problems of access to courts and improving substantive law. But that reflects an implicit assumption that once people get to court, they will get justice,” Polavarapu said. “This trip was designed to question whether that assumption holds, or whether there are obstacles to receiving justice, particularly for women, once they are actually in court.”

Her research has so far revealed several obstacles, including the prevalence of corruption and difficulty executing favorable court judgments. One area where this difficulty is apparent is land-based judgments.

“The law requires that women be permitted to inherit land. Still, many women face resistance when they try to assert their rights, and few manage to make their way to the formal courts.”

Even then, she said, the likelihood of a court enforcing a positive judgment remains tenuous at best. “Sometimes a magistrate will visit the disputed area to make sure the parties allocate the land properly, but not all magistrates are willing or able to do this.”

While her research shows that many hurdles remain to ensuring that Ugandan women are treated fairly, both in formal and informal justice systems, Polavarapu returned from this trip with reasons to be optimistic.

“I met with many advocates, activists, and government officials who are committed to improving Uganda’s justice system,” she said. “The recent bride price ruling shows that positive changes are being made through the efforts of people like them, and I look forward to continuing to track the country’s progress.”