The Proving Ground finale searches for ‘next big thing’ 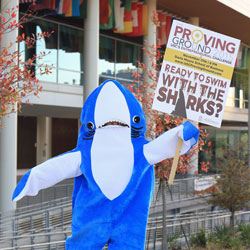 With nearly $90,000 in total prizes and startup support at stake, eight teams will vie to win one of four prize categories in a business-pitch competition called The Proving Ground.

Imagine several teams of aspiring innovators pitching a product or service they believe to be “the next big thing” to a panel of seasoned entrepreneurs before a live audience. On the line is up to $20,000 to make their startup idea a reality. No, you’re not watching an episode of the popular ABC-TV show, “Shark Tank.” It’s the final round of The Proving Ground, the University of South Carolina’s annual entrepreneurial competition.

The Proving Ground 2015 finale is the result of a three-month, three-round competition culminating in a live-pitch event starting at 6 p.m., Tuesday (Nov. 17) in the W.W. Hootie Johnson Performance Hall at the Darla Moore School of Business.

With nearly $90,000 in total prizes and startup support at stake, eight teams will vie to win one of four prize categories. The Maxient Innovation and Avenir Discover Prizes go to the teams with the best business concept, with $20,000 each awarded to first place winners. The Fluor Social Impact Prize rewards the team that best addresses a social or environmental problem. With first place comes $17,500.

Raphael Tosti, a third-year international business and marketing student is ecstatic to be chosen as finalist.

“Six months ago, this was just a dream and now we are less than a week away from pitching in front of a panel of successful judges and hundreds of people,” Tosti says. “It feels great to have come this far and be among the finalists.”

Tosti is part of team “Crunchwall,” a mobile platform where students can connect with organizations they’re involved with on campus and reap the benefits from greater connectivity with and communication among university organizations.

For Philip Conrad, a fourth-year computer science major, he and his teammate Benjamin Davis, looked into how their idea could make homes and businesses safer. Conrad and Davis comprise team “ASSET,” a technology resource that works with existing security systems to track intruders in real-time on mobile devices.

“What makes our idea so unique is that it’s a case where there is a big gap in existing technologies, and Benjamin and I found a clever and cost-effective solution that fills that gap,” Conrad says.

Like “Shark Tank,” The Proving Ground brings together a variety of ideas, teams and judges in a fast-paced, high-energy, pitch-to-win environment. Prize categories vary, with teams comprising one or more undergraduate and graduate students or recent alumni.

This year’s field of startup ideas also includes “Vuepeer,” which aims to provide consumers with the best deals on a variety of rental vehicles and “Carolina Community Farm and Garden,” a hydroponics system that provides fresh, local and organically grown lettuce and basil to UofSC’s dining services, area restaurants and the Columbia community.

The judges are not the only ones in control of this competition. The audience will pick the winner of the SCRA Technology Ventures Fan Favorite Prize, with an award of $4,000. The two teams competing for fan favorite will be “Bonjuo,” a language learning application that puts a social twist into studying a foreign language and “thinkINK,” a greeting card system that offers an advanced mailing service with a diverse palette of customization options so that greetings reflect a sender’s personal style.

Tensions are rising as finalists work to perfect their pitch for Tuesday night. Finalists like Alex Smolen, a fourth-year accounting student, are in the throes of preparation.

“It’s been a busy week putting together a presentation for the finals,” Smolen said. “We’ve been fortunate enough to have a supporting network who is providing feedback.”

Smolen, part of the team “Vuepeer,” says he’s a fan of the TV show “Shark Tank”.

“I think the Q&A part will be similar to the show, but we are only pitching for five minutes,” he says. “We have some smart judges coming, so I am interested in hearing what they think about everyone’s ideas.”

All winners in The Proving Ground finale also will be awarded an affiliate membership in the USC/Columbia Technology Incubator.

The 2015 competition is presented by the university's Faber Entrepreneurship Center and Office of Economic Engagement as well as EngenuitySC.

Read more about the judges and prizes for The Proving Ground 2015.