Learn something new ‘On the Horseshoe’

Elizabeth Cassidy West has been telling and curating the story of the University of South Carolina for more than 15 years as the university’s archivist.

But nowhere is the university’s story more clearly told than in the buildings of the Horseshoe, the original campus for South Carolina College and the heart of today’s sprawling downtown Columbia campus. 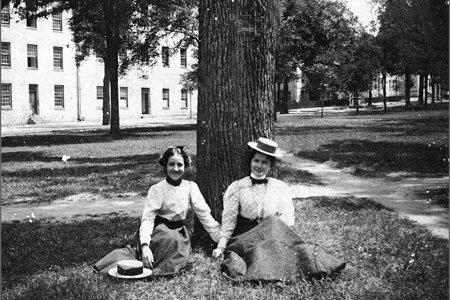 These young women (seen in this photo, circa 1898) were likely among some of the first to enroll when the university went co-educational in the 1890s.

West, ’89 journalism, ’95 MLIS and ’02 MA history, and project archivist Katharine Thompson Allen, ’12 MA public history and ’12 MLIS, have put together a concise history of the Horseshoe, its buildings and its people, “On the Horseshoe: A Guide to the Historic Campus of the University of South Carolina.”

“The Horseshoe is still a very lived-in place and a vital part of campus.”

The idea for the current book came from Allen’s project as West’s graduate assistant to create an exhibit of a chronology of the Horseshoe.

“Not being from South Carolina, there was a big learning curve for me to get started,” says Allen, who grew up in Dallas and came to Carolina from San Diego.

From that, the pair created a booklet for USC Libraries for self-guided walking tours of the Horseshoe. When he saw that, Jonathan Haupt, director of USC Press, invited them to submit a full-length book manuscript that would be more inclusive of everyone’s story than previous volumes, but still capable of also serving as a walking guide.

“The Horseshoe is the heart of the campus and of the student, faculty and staff experience at USC,” Haupt says. “But the site as a whole and its many buildings and structures have lived so many lives beyond the encounters any one class or generation has had with the campus.

“I wanted to be able to share a concise chronicle of that history of the Horseshoe, and the building-by-building tour model seemed an opportune approach, not only for the benefit of those with immediate access to the Horseshoe but also for our alumni and friends who can revisit the campus vicariously through the book.”

The book is about the size of a diary or personal journal and is “written like a popular history,” West says. “We tried to include everyone’s story.” 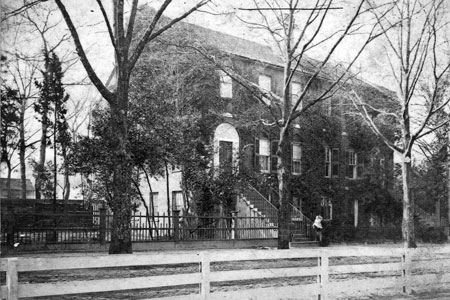 Lieber College, (seen in this photo, circa 1875) was named for Francis Lieber (1800-1872), nicknamed “Old Bruin” by his students for being hot-tempered and impulsive; trying at one point to have one student expelled for stupidity.

Among the more colorful characters spotlighted is Francis Lieber (1800-1872), nicknamed “Old Bruin” by his students for being hot-tempered and impulsive; trying at one point to have one student expelled for stupidity.

“Francis Lieber was one of the institution’s most illustrious scholars,” the authors write. “Prior to joining the faculty of South Carolina College, Lieber founded the Encyclopedia Americana and was an internationally known professor of history and political economy, which he taught at the college from 1835 until 1855.”

The building that bears his name is across the Horseshoe from South Caroliniana Library and was where he lived from its construction in 1837 until his departure from the college after a failed bid at becoming president.

“Lieber owned slaves during his tenure at the college, although much of his scholarship argued for the implementation of wage labor,” the authors write. “He had a harder time disguising his increasingly hostile view toward secession, a position at odds with the majority of the students.”

Following his failed bid for president of the university in 1855, Lieber moved to New York with most of his family, leaving behind his eldest son, who later fought for the Confederacy and was estranged from the rest of the family. Oscar Montgomery Lieber died from his wounds at a battle in Williamsburg, Va.

Authors Elizabeth Cassidy West and Katharine Thompson Allen present highlights from their new book, “On the Horseshoe: A Guide to the Historic Campus of the University of South Carolina,” at 5:30 p.m., Dec. 8, at South Caroliniana Library.