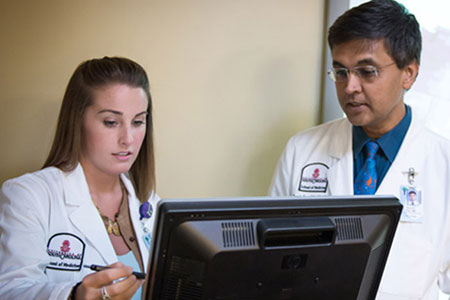 The School of Medicine’s Souvik Sen (right) is leading a new clinical study, called PREMIERS, with project coordinator Lauren Dennis (left) that is enrolling patients throughout the Carolinas to better define just how many strokes, heart attacks and other devastating cardiovascular events might be prevented with better oral care.

A nice smile has more than cosmetic benefits. It might impress your doctor as well.

Medical scientists have built a strong connection between poor oral health and diseases that might seem unrelated, says Souvik Sen, the chair of the neurology department in the School of Medicine. Periodontal disease, commonly called gum disease, is associated with a wide variety of ailments.

“There are a lot of studies, not just in the U.S. but throughout the world, that point to a link between periodontal disease and stroke, heart attack and cardiovascular health,” says Sen, who was recruited to the university in 2010 as the SmartState Endowed Chair in Clinical Stroke Research. “And there is also a very strong relationship between periodontal disease and diabetes, high blood pressure and obesity.”

That’s why Sen is leading a new study that aims to get patients who are at risk for stroke ahead of the curve. The National Institutes of Health recently awarded a $3.43 million grant for a two-state clinical effort to help get patients in the Carolinas with gum disease in to see periodontists, the gum specialists, for high-quality preventive care.

The study, a collaboration between the University of South Carolina’s School of Medicine and the University of North Carolina at Chapel Hill’s School of Dentistry, will enroll patients from counties throughout the Carolinas. The goal is to see whether better periodontal care translates into a reduced risk for stroke and other cardiovascular events.

“Studies show that tooth loss is very common in South Carolina, and tooth loss is really the end result of gum disease, a dental infection," Sen says. “South Carolina is also in what is called the ‘buckle’ of the stroke belt, which means high stroke rate, heart attack rate, and death from stroke and heart attack. This will be one of the first prospective randomized clinical trials that is actually looking at the event — stroke, heart attack or death — as an outcome. Because at the end of the day, what would matter the most is the information that this approach might prevent stroke, heart attack or death.”

Depending on the results, the study might provide the kind of "ounce of prevention vs. pound of cure" data pointing the way to a highly effective early intervention initiative. It might also address some of the differences in stroke risk that physicians have long observed among patients: prevalence is higher in rural populations and among African-Americans, for example.

“All patients will get enrolled, it’s not specific to any minority group, but this is funded by NIH’s National Institute on Minority Health and Health Disparities, so a big focus is looking at groups in South Carolina who are having stroke and transient ischemic attacks at higher rates,” Sen says. “We have referrals from counties all over the state and are able to catch a real mix of patients. It is a really big problem here in South Carolina and we will try to figure out from this study if periodontal treatment could help treat a novel risk factor.”