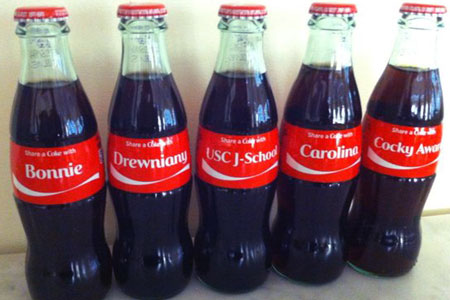 Students and faculty will meet in the School of Journalism and Mass Communications’ state-of-the-art multimedia room to watch Super Bowl 50 between the Carolina Panthers and the Denver Broncos. But the focus for those in attendance will not be the football game, but rather the advertisements in between the plays.

Since 2004, advertising professor Bonnie Drewniany and students of her ever-popular Super Bowl Advertising class have met to determine the top commercial to air during the big game based on specific criteria. After the students' votes are counted, the winning company and its agency receive the Cocky Award. The winning advertising team usually makes an appearance in Drewniany’s class to accept the award and talk to students. Last year’s winner was Coca-Cola’s “Make it Happy”

This year’s class, which meets Tuesday and Thursday, has already been working hard to research and campaign for the upcoming commercials before they air.

We caught up with Drewniany to learn a little more about her Super Bowl class.

Is there anything special or different about this year's event that will be different from years past?

This year, my students will work in small teams to analyze the pre-game and post-game hype for each national commercial. Winning the ad game is as much about getting buzz before, during and after the big game. It will be interesting to see if all the pre-game buzz will influence the outcome of our ad poll on Super Bowl Sunday. Will the commercials live up to the buzz? Will they disappoint?

How is the winner determined? Does the online poll factor in?

Students use their iClickers to rate each ad on likability, brand identity and persuasiveness. The software program averages the scores, and by the end of the evening, we know which commercial is the best overall.

Our online poll is a way to get alumni and friends of the university involved and asks respondents to choose which commercials they found most likable, persuasive and had the strongest brand identity. Since our online poll doesn’t ask respondents to evaluate each commercial, it’s not as scientific as our student poll. Still, the online poll is important because we use it to break ties in our student poll. In 2011, two commercials— VW’s "The Force” and a consumer generated spot for Doritos — tied for best overall in the student poll. We used our online results to break the tie and gave the Cocky Award to VW and its agency, Deutsch.

Why do you think the public and students enjoy the class and event so much and flock to it every year?

The class reflects American society’s love of the ad game. The Super Bowl has become as much about watching the advertising championship as it is about watching the football championship. There are two big events in my class — first is the big game with the ad poll and then, later in the semester, the recipients of the Cocky Award come to class and share the behind-the-scenes stories of the commercials. I also invite alumni who have worked on a Super Bowl commercial to come to class. So far, I know of five advertising alumni who are working on commercials for Super Bowl 50. The rest of the semester, we use my archive of Super Bowl commercials to show changes and trends in American society.

What do you think makes an effective super bowl ad?

Many polls look solely at likability. Although that’s important, it’s not enough of a justification to spend $5 million for 30 seconds. So many of the most likable ads don’t make a relevant brand connection. Certainly you can think of ads you’ve loved, but don’t know who the advertiser was. That’s why our poll looks at three criteria — likability, persuasiveness and brand identity.

This year’s lineup of commercials will include spots from the following companies:

An online ad poll for friends and alumni of the university will go live at the conclusion of the Super Bowl and remain open until 10 a.m., Feb. 8 at the ad poll’s webpage.